(with Loder): Jake Dominick DeLuise
Peter John DeLuise is an American actor, director, producer, and screenwriter who is best known for his role as Officer Doug Penhall in the Fox TV series 21 Jump Street. He is the oldest son of the late actor Dom DeLuise and the brother of fellow actors Michael and David DeLuise.

For Disney, he directed the 2014 Disney Original Movies film, Zapped. He also directed a few episodes of the ABC/Freeform drama show, Shadowhunters: The Mortal Instruments. 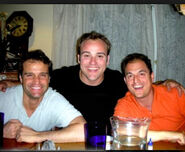 Peter with his brothers, David and Michael in June 2009.

Peter DeLuise attending the 2011 AFI Gala.
Add a photo to this gallery
Retrieved from "https://disney.fandom.com/wiki/Peter_DeLuise?oldid=3909651"
Community content is available under CC-BY-SA unless otherwise noted.