3
Peter Linz is an American puppeteer who has performed characters, such as Tutter and Pip in Bear in the Big Blue House, and Walter in The Muppets and Muppets Most Wanted. He also is going to play Joe the Legal Weasel in the new Muppets Now show. In addition, he performed Winnie the Pooh in The Book of Pooh (but only the puppetry, while Jim Cummings still voiced him).

Outside of Disney, he recently has taken over the roles of Ernie (from Billy Barkhurst, who in turn, had replaced Steve Whitmire, who started performing Ernie after Jim Henson died) and Herry Monster (from Tyler Bunch, who in turn, took over for Jerry Nelson) in Sesame Street. 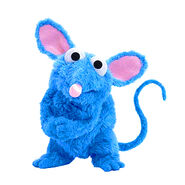 Walter
(The Muppets, Muppets Most Wanted)

Robin the Frog
(2017-present)
Add a photo to this gallery
Retrieved from "https://disney.fandom.com/wiki/Peter_Linz?oldid=4343244"
Community content is available under CC-BY-SA unless otherwise noted.