His Disney roles include Galen Bradwarden in Dragonslayer, Fenwick in Recess: School's Out, Major in two episodes of Buzz Lightyear of Star Command, Professor Elliot Randolph in the Agents of S.H.I.E.L.D. episodes "The Well" and "Purpose in the Machine", and Tseebo in two episodes of Star Wars Rebels. He also portrayed Dr. Robert Stark in seven episodes of the ABC series, Grey's Anatomy. He also voiced Nigel the Advisor in Tangled: The Series. 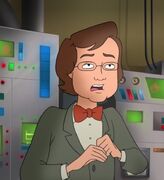 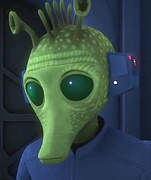 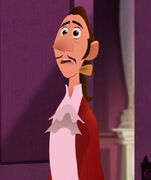 Nigel
(Tangled: The Series)
Add a photo to this gallery

Peter MacNicol speaks at the CSI: Cyber panel at the 2015 Winter TCA Tour.
Add a photo to this gallery
Retrieved from "https://disney.fandom.com/wiki/Peter_MacNicol?oldid=4038993"
Community content is available under CC-BY-SA unless otherwise noted.