Peter Maza is a former police officer at the 23rd Precinct. He is Diane Maza's husband and the father of Elisa Maza. He is featured in the animated television show Gargoyles. 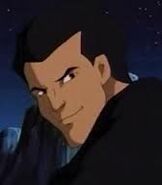 Retrieved from "https://disney.fandom.com/wiki/Peter_Maza?oldid=845431"
Community content is available under CC-BY-SA unless otherwise noted.