Active
Peter Moosebridge is a news co-anchor for the ZNN in the 2016 Disney computer-animated feature film, Zootopia. In most releases (including the North American one), he appears as the default male news anchor character. However, certain countries have released different animals exclusively.

Peter Moosebridge, along with Fabienne Growley, his co-anchor, only makes two brief appearances in the film. First, the two are seen reporting the bad news in Zootopia—labeling it as a "city gripped by fear"—where a caribou was critically injured from a mauling by a savage polar bear, and a protest against a peace rally organized by Gazelle.

He and his co-anchor appear one final time when they report Bellwether's arrest for conspiring the predatory attacks on Zootopia, Lionheart's denial of his knowledge of Bellwether's plot and claim of his actions of the illegal imprisonment of the savage animals to be "done for the right reasons", and an antidote to Night howlers proving effective in rehabilitating the infected predators.

Michael Tanuyama,[2] (マイケル・狸山), a tanuki (Japanese species of raccoon dog) replaces Moosebridge in the Japanese version. Additionally, he has a green leaf on his hat. He is voiced by Japanese comedian and choreographer Koura Kazumasa.[3]

David Koalabell replaces Moosebridge in the Australian and New Zealand versions of the film. Like Moosebridge, his name is a reference to his actor, Australian entertainer David Campbell.

In the mainland Mandarin Chinese version of the film, instead of a moose the newscaster is replaced with a panda.

Peter and his co-anchor, Fabienne Growley. 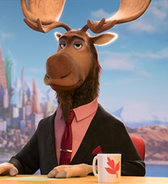