1985-present
Peter Schneider is an American film and theatrical producer, notable as the first president of Walt Disney Feature Animation for The Walt Disney Company from 1985 to 1999 and was responsible for helping to turn the feature animation department around and creating some of the most critically acclaimed and highest grossing animated features that Disney released. These films included Who Framed Roger Rabbit (1988), The Little Mermaid (1989), Beauty and the Beast (1991, the first animated feature to be nominated for an Academy Award for Best Picture), Aladdin (1992), and The Lion King (1994), the highest domestic grossing animated film of all time until 2003.

Schneider also sealed the deal that created the highly successful partnership between Pixar and Disney. He was promoted to studio chief in 1999. In 2001, Schneider left Disney to form his own theater production company. His first major production, developed in association with Michael Reno, was Sister Act (musical) which opened at the London Palladium in 2009. Peter graduated from Purdue University in 1972 with a theatre degree.

Along with producer Don Hahn, Schneider produced a documentary entitled Waking Sleeping Beauty in 2009, which focused on the revival of Disney animation during the 1980s and early 1990s. In Disney's 1988 animated movie, Oliver & Company, he was caricatured as a pawn shop owner, whom Fagin tries to pawn his watch to. 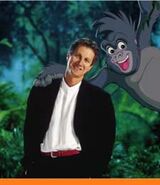 A caricature of Peter Schneider with Fagin in a pawn shop in Oliver & Company
Community content is available under CC-BY-SA unless otherwise noted.
Advertisement