Disney Wiki
Register
Don't have an account?
Sign In
Advertisement
in: Films, Make Mine Music, Animated shorts,
and 4 more
English

Peter and the Wolf is an animated short of the segment in Make Mine Music. It was released in 1946 and produced by Walt Disney, with Sterling Holloway providing the voice of the narrator. It was reissued as a stand-alone short on September 14, 1955.

The musical tale of Peter, a small Russian boy who goes out to hunt a wolf, and almost bites off more than he can chew!

Each character is represented by a corresponding instrument in the music:

This version makes several changes to the original story, for example:

This version of Peter and the Wolf was featured in House of Mouse, and characters from it appeared in Who Framed Roger Rabbit, and an audio recording of it with expanded narration by Sterling Holloway was released on Disneyland Records (DQ-1242). On one of his television programs, Disney recalled how Prokofiev himself visited the Disney studio, eventually inspiring the making of this version. Disney used an actor to recreate how the composer sat at a piano and played the themes from the score. 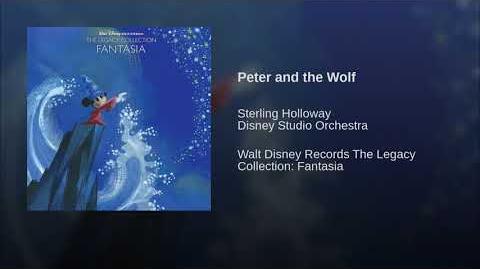 The wolf in a storyboard panel

Designs and concepts for the wolf