Disney Wiki
Register
Don't have an account?
Sign In
Advertisement
in: Characters, Bears, Phineas and Ferb characters,
and 17 more
English

Phineas and Ferb: Across the 2nd Dimension

“Oh, Perry the Platypus. Uh, how long have you been... An-and look at that! It's... It's Peter the Panda, my ex-nemesis. What a coincidence, huh?”
―Heinz Doofenshmirtz

Peter the Panda is a recurring character of the animated TV show, Phineas and Ferb. He is a secret agent panda from Seattle who uses the same hat as Perry the Platypus but the color is lighter. Peter met the evil Heinz Doofenshmirtz at a convention there and became a pawn in his scheme to capture every secret agent in the world. Teaming up with Perry the Platypus, Doofenshmirtz's nemesis, he defeated the mad scientist and destroyed the Freeze-inator.

Peter hasn't shown any sign of communication. It is a possibility only other animals can understand him, but that is also unlikely. Peter, though cute and quiet, may have an aggressive and crazy side; as he was shown throwing chairs with a blank expression on his face (much like Ferb Fletcher, who usually keeps a straight face while doing various activities).

Peter doesn't seem to care about Perry's reaction to him. He could be happy about being his replacement, sparking the rivalry of the two. Or, since he (again) showed no true expression, he had truly no clue what was going on. Another explanation could be that he just lacks empathy.

Peter seems more serious with his agency work than Perry. He disassembled Doofenshmirtz's ray while Doofenshmirtz was "singing about his feelings", the opposite of what Perry does, waiting until Doofenshmirtz was done with whatever he was doing ("It's About Time!").

Peter the Panda lived in the city of Seattle, Washington, where he was a secret agent. One day, while at a convention center in the city, he met the evil Dr. Heinz Doofenshmirtz. Doofenshmirtz was a Druelselstein mad scientist who lived in the city of Danville and ran an evil corporation entitled Doofenshmirtz Evil Incorporated. The two "instantly disliked each other" and quickly became new nemeses. Peter was not aware that Doofenshmirtz secretly intended to have him make Perry the Platypus jealous which would lead to a series of events, allowing him to capture and freeze all the secret agents ("It's About Time!").

As Peter was now Doofenshmirtz's new nemesis, he went to the city of Danville in the Tri-State Area. At one point, Heinz had created a freezing machine, which was secretly a decoy for a real one, so Peter confronted and fought him in his apartment. While in the middle of their fight, Perry the Platypus arrived so Heinz quickly shoved Peter in his closet so Perry wouldn't know. Peter got out of the closet, however, so Doofenshmirtz explained to Perry what had happened and he left, depressed.

Peter and Doofenshmirtz continued their battle. Peter throws Heinz against the wall then kicks through a picture to hit him in his face. Looking at the picture makes Heinz nostalgic and begins to reminisce through song, thinking about his time as Perry's nemesis and about his feelings. Peter took this as an opportunity to disable the freeze ray, which made Doofenshmirtz upset and he walked away, allowing Peter to disable it further ("It's About Time!").

Feelbetter asks Peter to stack the chairs quickly and the show starts once more. Perry and Heinz eventually rekindle and decide to become nemeses once more. It was this point that Doofenshmirtz trapped all the agents in the audience with straps on their chairs, including Peter and Perry, and revealed his true intentions of freezing the secret agents. He also showed them his real freeze ray, which he would use to freeze the secret agents in the room for his giant chessboard.

Heinz apologizes to Peter as he feels things turned out "awkward." Teaming up with Perry, the two were able to break free of their captivity and freed the other agents. While the audience agents fought their respective nemeses, Peter and Perry tag teamed and took down Doofenshmirtz, along with his freeze ray. With Doofenshmirtz and the villains defeated, Peter discontinued his role as Heinz's nemesis ("It's About Time!").

Peter was later seen at the Inator contest where he was one of the captured agents, implying that he has moved on and found a new nemesis. After Perry freed the other agents, Peter assisted them in fighting the Inator contest's participants ("Robot Rodeo").

During 2nd Dimension Heinz Doofenshmirtz 2's invasion, Peter aided the other agents in fighting the army of invading Norm Bots. They are quickly defeated after ambushing a group of Norm bots but are saved by Perry. He then uses one of Phineas and Ferb's kiddie rides to fight off the invasion ("Phineas and Ferb the Movie: Across the 2nd Dimension").

He teamed up with Perry once again to rescue Doofenshmirtz from Mitch and later had dinner with Perry inside the Space Needle. ("Meapless in Seattle")

Peter with Perry the Platypus 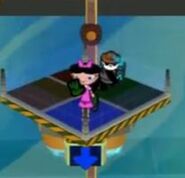 Peter in the Phineas and Ferb: Across the 2nd Dimension video game with Isabella

Peter with Pinky and other O.W.C.A agents singing Carpe Diem

Peter backstage on The Dr. Feelbetter Show with headphones on

Peter in Phineas and Ferb the Movie: Across the 2nd Dimension

Peter the Panda as a figure

Peter with Perry in Seattle