Sean and Birgen
Philip Edward "Phil" Hartman was a Canadian-American actor, voice actor, comedian, graphic artist, and screenwriter, who was best known as a cast member on Saturday Night Live from 1986 to 1994, Bill McNeal on NBC's NewsRadio, Captain Carl in the first season of Pee-wee's Playhouse, and for voicing Troy McClure, Lionel Hutz, Evan Conover, and Lyle Lanley in The Simpsons from 1991 until his death in 1998.

For Disney, he voiced Paddywhack in the Disney TV series Darkwing Duck, Air Conditioner and Hanging Lamp in the 1987 feature, The Brave Little Toaster, Jiji the cat in Kiki's Delivery Service, and various others listed below. 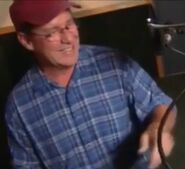 Phil Hartman behind the scenes of Kiki's Delivery Service.