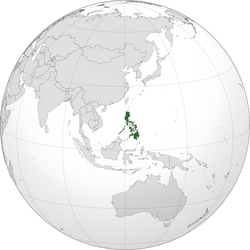 The Philippines is a sovereign island country in Southeast Asia in the western Pacific Ocean. Officially Republic of the Philippines (Filipino/Tagalog: Republika ng Pilipinas), it is the 12th populous country and the capital is Manila. Covering approximately 334.35 square kilometers.

The Republic of the Philippines is a unitary presidential constitutional republic, and is divided into three groups: Luzon, Visayas and Mindanao. These are divided into 17 regions, 81 provinces, 144 cities, 1491 municipalities and 42,028 barangays.

Atlantis Theatrical also did their own stage versions of the Disney Broadway shows, The Little Mermaid, Aladdin, and Tarzan.

Many famous Filipinos have worked in Hong Kong Disneyland too.

Most of the TV shows produced by Disney are dubbed from English into Filipino as of today but when the films broadcast on ABS-CBN and GMA, some of them retained their English language.

Toon City worked for many Disney productions such as Kim Possible, Mickey's House of Villains, The Legend of Tarzan, and the reboot version of DuckTales (Snipple Animation Studios also worked for the latter).

Actors/Actresses and Crew born in the Philippines

Flag of the Philippines