Phineas and Ferb: Quest for Cool Stuff is a video game based on Phineas and Ferb that was released for multiple platforms on August 12, 2013. The game follows Phineas and Ferb as they collect artifacts for their Museum of Cool, while Perry attempts to stop Dr. Doofenshmirtz from taking over the Tri-State Area.

From the official press release:

FEAST YOUR EYES ON THE BOYS’ NEWEST INVENTION AS MAJESCO ENTERTAINMENT RELEASES THE OFFICIAL GAME TRAILER FOR ‘PHINEAS AND FERB: QUEST FOR COOL STUFF’

Edison, NJ – June 11, 2013 – Today,Majesco Entertainment Company (NASDAQ: COOL), an innovative provider of games for the mass market, along with Disney Interactive, debuted the premiere trailer for Phineas and Ferb: Quest for Cool Stuff. Watch Major Monogram showcase the latest in automotive technology as he features the boys’ newest ride, the A.T.T. (All-Terrain Transformatron). The upgradeable, ultra-cool amphibious A.T.T. is equipped with wall-scaling pincers, indestructible drills, and customizable colors. It’s a fun, out-of-this-world treasure-hunting adventure as the inventive stepbrothers enjoy their last week of summer. Meanwhile, Perry the Platypus, aka crime-fighting Agent P, isn’t fooled by competitors like Dr. Doofenshmirtz who plans on unleashing his evil horde of robot–inators to get rid of cool stuff in the Tri-State Area.

Based on the top-rated Emmy Award-winning hit series, Phineas and Ferb: Quest for Cool Stuff is expected to release on the Xbox 360® video game and entertainment system from Microsoft, Wii Uvideo game system, Wii™, Nintendo DS™ and Nintendo 3DS™ this August. 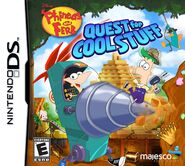 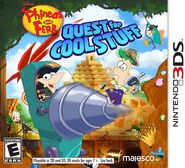 Wii U cover
Add a photo to this gallery

Retrieved from "https://disney.fandom.com/wiki/Phineas_and_Ferb:_Quest_for_Cool_Stuff?oldid=4460471"
Community content is available under CC-BY-SA unless otherwise noted.