Phineas and Ferb: The Best LIVE Tour Ever! 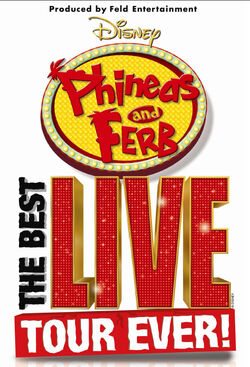 Disney's Phineas and Ferb: The Best LIVE Tour Ever! (referred to in advertising as Disney's Phineas and Ferb LIVE!) was a live stage show produced by Feld Entertainment under license from Disney which toured North America from August 2011 to May 2012. After a summer vacation of their own, the tour resumed on August 24, 2012, ending in Chattanooga, Tennessee on February 18, 2013.

The show premiered at the Lakeland Center in Lakeland, Florida on August 21, 2011. The 90-minute show featured live actors in costumes for the characters. Some are full body suits, including Phineas, Ferb, Buford, Heinz Doofenshmirtz, and Perry the Platypus. Others, including Candace, Jeremy, Isabella, and Baljeet, are wearing costumes that resemble the character's clothing and masks with the character's haircuts and large goggles for eyes. A few backup dancers and a henchman for Dr. Doofenshmirtz also appear. The show features one original song written for the production, while the rest are re-worked versions of the songs from the television show made to fit the characters singing them. Dr. Doofenshmirtz also sings a medley of Broadway hits, including One from A Chorus Line and The Impossible Dream from Man of La Mancha.

VIENNA, Va., May 11, 2011 -- Phineas and Ferb are gonna do it all! Disney Channel's animated gem, the critically acclaimed "Phineas and Ferb," TV's #1 animated series among Tweens 9-14 for three years running, has reached a new pinnacle by inspiring an exciting live touring stage show which will play more than 80 hometowns across the country beginning in August.

Produced by Feld Entertainment, Disney's Phineas and Ferb: The Best LIVE Tour Ever!, brings Phineas, Ferb, Candace, Isabella, Baljeet, Buford, and friends to the stage as they make the most of the last day of summer by building an invention bigger, better, and more amazing than ever. Before anyone can wonder "Hey! Where's Perry?," the pet platypus dons his Agent P fedora, and hilarious hijinks unfold as he battles Dr. Doofenshmirtz to save the Danville Tri-state area and audiences everywhere from the evil scientist's most havoc-wreaking scheme to date.

"Disney Channel has created an extraordinarily popular TV series that offers humor for multiple generations and I am thrilled that Feld Entertainment is bringing Disney's 'Phineas and Ferb' to the stage for the very first time," said Producer Alana Feld. "The dynamic characters, witty humor, and inspired music from the television series set the perfect foundation for Disney's Phineas and Ferb: The Best LIVE Tour Ever! to create an unparalleled Phineas and Ferb experience for audiences."

"We are filled with a great sense of pride over this upcoming live tour and are especially thrilled with the achievements of the Feld creative team which has produced a smart, interesting, and funny stage show, that extends the characters, stories, and comedy that are at the heart of what we do every day," said "Phineas and Ferb" co-creators Dan Povenmire and Jeff "Swampy" Marsh.

Audiences will be whisked on a high-energy ride that is part action adventure and part rock concert, while they move it and shake it to a soundtrack of hit songs from the animated series, including "Gitchee Gitchee Goo", "S.I.M.P. (Squirrels In My Pants)", "Backyard Beach (song)", "Everything's Better with Perry", "Busted", "Today is Gonna Be a Great Day", and "Summer Belongs to You". Familiar songs serve as a main ingredient in the plot, advancing the story from scene to scene, while taking on a whole new feel when fused with fresh, original choreography and inventive special effects.

Some of the cities on the 2011-12 tour will be revisited in 2012-13, with the schedule having the following additions for this leg.

The show begins with the curtain opening, and an animated Phineas and Ferb are shown on a big screen, sitting in their backyard. Phineas is sad that it is the last day of summer, and says that they need a new invention to make it the best day ever. The two both notice the audience in front of them, and run into the screen. Ferb notices a slide that brings them to the stage. Both slide down, and a live action Phineas and Ferb in costume appear. They both decide to put on the best live show, and sing the exclusive song, We're Gonna Put On A Show!. The rest of the cast (Isabella, three Fireside Girls - Milly, Gretchen. and Katie, Buford, Baljeet, Candace, and Jeremy) join them on stage. Candace tries to bust Phineas and Ferb, but ignores the urge due to Jeremy being there. Phineas then asks "Where's Perry?". Meanwhile, Agent P appears, beats up some generic bad guys while the gang sings a medley of, Everything's Better with Perry and Perry the Platypus. Then Perry gets his mission from an animated Major Monogram to stop Dr. Doofenshmirtz and his Audience-Controllinator. It's revealed that Doofenshmirtz has always wanted to perform in a Broadway musical, but cannot due to his lack of talent. With his Audience-Controllinator, though, he will be able to force to people to admire him. He then lunches into a medley of Broadway show tunes. The canes used by Doof and his backup dancers eventually become the bars for a trap for Agent P.

Phineas, Ferb, and the rest of the crew then start brainstorming about what to do for their show. Ferb suggests a beach, which everyone agrees to, because a beach will help them think of something to do their show about. This leads into the song Backyard Beach. Then, they end up having so many ideas, that Phineas and Ferb decide to make an idea mash up machine, which will combine their ideas. When the machine breaks down, and because everyone is sitting down for a long time so they decide to give the audience a break for intermission.

After intermission, some small kids are brought on stage from the audience to test the audience-controllinator. Dr. Doofenchmirtz commands them to dance, and they do to the song Gitchee Gitchee Goo. However, the audience-controllinator isn't working on the whole audience, and Doofenshmirtz says that it needs a few adjustments.Then, Phineas and Ferb being mashing up ideas. First, Isabella's marshmallow roasting idea and Buford's monster truck idea are combined to make a monster truck with marshmallows for tires, but not before Phineas & Ferb appear in marshmallow-tired go-carts. The song Truck Drivin' Girl is repurposed as Truck Drivin' Boy. They then add in Baljeet's Bollywood idea to launch into another musical number. Phineas' miniature golf idea and Jeremy's desire for disco are combined, and the song Disco Miniature Golfing King (originally Disco Miniature Golfing Queen in the television series) plays. Giant beach balls that look like golf balls are launched into the audience. Candace then wants her idea presented by herself, which is to try on pants. She finally finds the perfect pair, bringing on the songs Fabulous. Now satisfied, she allows her idea to be combined with the Fireside Girls' idea about cute furry animals, resulting in the song S.I.M.P. (Squirrels In My Pants). Before Phineas and Ferb can then combine everybody's ideas, the machine breaks, and they need a new handle for it.

Back with Doofenshmirtz and Perry, the evil doctor has made final adjustments. However, Perry escapes from his trap, and the final battle between him and Dr. Doofenshmirtz ensues (parodying The Matrix and Star Wars at some points). Perry eventually manages to win the fight and defeat Doofenshmirtz. Phineas and Ferb come across the audience-controllinator, and discover that a part of it is just the right size to fix their machine. Upon discovering the audience controllinator's true purpose, by zapping Candace into becoming a chicken, they decide to control the sun so that it never goes down and summer can truly last forever. The cast launch into Today is Gonna Be a Great Day, with Summer Belongs to You! and Follow the Sun, as the curtain call.

The Set of Disney's Phineas and Ferb: The Best LIVE Tour Ever! while performing at Syracuse, NY on November 13, 2011 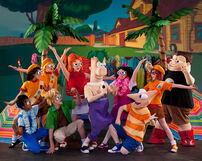 The cast of characters in a photo 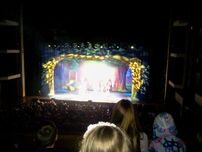