Disney's Phineas and Ferb Magazine was a semi-bimonthly publication based off of Phineas and Ferb, created and originally printed by Disney Publications, and later published by Redan Publishing. It was published for a total of 27 issues, plus three specials, from March 2011 to January 2015. Each issue contained comics, puzzles, games, and articles relating to the show. 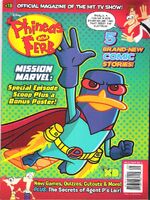