Screenshots and promotional artwork from Phineas and Ferb the Movie: Across the 2nd Dimension. 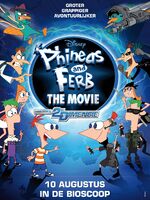 The poster for the Netherlands 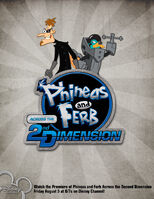 Phineas, Ferb, and Perry in their room

Perry chattering on a bed

Perry on top of Phineas

Perry at the OWCA animal shelter

Perry and Pinky go to their lairs

Carl with Agent P in his lair

Phineas and Ferb saying sorry to Doof for ruining his invention

Perry unhappy at what he sees in the 2nd Dimension

Platyborg with a robot

Isabella-2 with Phineas, Phineas-2, and Ferb

Phineas and Ferb using Heinz as a bridge

Doofenshmirtz-2 looking down at his Normbots

Several of Phineas and Ferb's Big Ideas being used at once

A robot throws a car

Heinz in his Alternate form

Candace in her Alternate form

The Baby Alien with the tiny gang

Vanessa-2 in a deleted scene

Isabella with a baseball launcher

Everyone wants Perry to stay and not be relocated

Doofenshmirtz-2 throws a muffin at a Norm Bot's face

Lawrence-2 sees Phineas and Ferb from the 1st Dimension

Candace says "Is that me? I look good!" referring to her 2nd Dimension counterpart

Stacy tries to get Candace back from the mysterious force

One of the photos seen in Takin' Care of Things

All of the Big Ideas before the fight

The Doofs, Phineas-1, and Ferb-1 on the DEi-1 building after the invasion is stopped after Doof-1 gives Doof-2 his Choo-Choo

Add a photo to this gallery
Retrieved from "https://disney.fandom.com/wiki/Phineas_and_Ferb_the_Movie:_Across_the_2nd_Dimension/Gallery?oldid=3826586"
Community content is available under CC-BY-SA unless otherwise noted.