The Photon Flyer is a small space jet that appears in the Disney Junior animated seires Miles from Tomorrowland. Built by Miles and M.E.R.C., the Phonton Flyer was designed to be a racer before becoming a secondary shuttle craft alongside the Star Jetter aboard the Stellosphere. It is fast and highly manoeuvreble when flying through the atmosphere of distant planets.

Originally built to compete in the Tomorrowland's Pilot Of Tomorrow Space Race, Miles and M.E.R.C. built the Photon Flyer to be very streamlined and highly manoeuvreble, which proves handy when flying low in the atmosphere of distant planets or dodging volcanic like eruptions. Although it is designed to only accommodate two passengers, Specifically Miles and M.E.R.C., it can be fitted with a third seat to accommodate a third passenger.

Even after its usage as a racer, the Photon Flyer has proven to be a handy scout vessel whenever the Star Jetter isn't available. Its greater use is measuring ground temperatures on distant planets. However like the Star Jetter, the craft is not entirely immune to unknown planetary environments such as extremely unnatural weather condition, but with a crew like Miles and M.E.R.C. the Photon Flyer always manages to make it out in one piece. 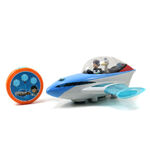 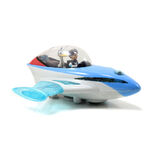 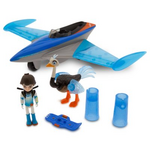 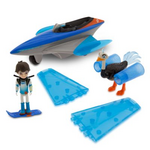 Retrieved from "https://disney.fandom.com/wiki/Photon_Flyer?oldid=1844420"
Community content is available under CC-BY-SA unless otherwise noted.