Phineas and Ferb
"Picture This"

When Ferb accidentally leaves his skateboard with Grandpa and Grandma Fletcher, he and Phineas invent a transporter to retrieve any object. Candace figures out she can transport Mom there to bust them because that would mean Mom is literally in their project. Meanwhile, Dr. Doofenshmirtz tries to rid the world of mimes by trapping them in invisible boxes.

Meanwhile, Linda enters the kitchen wearing some Mexican clothing and Candace questions her about her clothes. Linda says that she and Vivian are going to the Mexican-Jewish Cultural Festival. Linda invites Candace to come along, but Candace declines.

Now Phineas wants to try it on something more complex, and Buford volunteers. Ferb takes a picture of Buford just as a fly flies near Buford. When Buford is transported to the machine, he has the eyes, wings and one hand of a fly. Phineas says he forgot to install the fly filter and retries the transportation. Buford reappears as a human.

Phineas and Ferb then insert a picture of their grandpa's legs and Ferb's skateboard, and both the skateboard and that part of their grandpa's legs get transported. Meanwhile, back in London, Grandpa Fletcher wonders where his legs had gone, while Grandma Fletcher exclaims "I can breathe again!" with Reginald's feet gone. Phineas realizes this mistake and send the feet back, but they are returned facing the wrong way. The boys go and try out their half-pipe, and Phineas wonders where Perry is.

Perry walks into his lair and Major Monogram says he likes Perry's simple entrance. Monogram says that all mimes in the Tri-State Area are trapped in invisible boxes and suspects Doofenshmirtz and his new machine has something to do with this. He then tells Perry to destroy it.

Back at the boys' backyard, Isabella walks in and asks what they are doing. Phineas says they are conducting an experiment with their half-pipe and transporter. Ferb is at the top of the really huge half-pipe, and as a bird approaches the half pipe, Ferb pulls a lever and it flies through a trap door strategically placed in the half-pipe. Ferb then skates down the incredibly steep half-pipe.

Just at that moment, Candace looks out of the window and sees Ferb skating speedily up the half-pipe and away from the half-pipe. Everyone gasps, and Phineas inserts a picture of Ferb into the transporter. Ferb appears on the transporter and catches his skateboard. Everyone cheers, and Candace decides to tell Linda about this.

Candace goes to the Mexican-Jewish Cultural Festival and tries to convince Linda to come home, but thinks that once they got home, everything would be gone. Meanwhile, Phineas and Ferb help Buford to get his teddy bear back. Candace asks Mrs. Garcia-Shapiro for advice on how to bust her brothers, but Mrs. Garcia-Shapiro just remarks that Candace is too thin and offers her a matza burrito.

Back at the backyard, Phineas, Isabella, Buford and Baljeet and seated in a giant catapult. Phineas then launches the four of them into the air. Ferb then presses some buttons on the transporter and transports the four of them back to the ground.

At the Mexican-Jewish Cultural Festival, when she gets her picture taken, Candace realizes that, if she gets a picture of her mom, she can transport Linda to the backyard with the boys' transporter, and the transporter cannot disappear because Linda is in it. She then snatches a camera and takes a picture of Linda.

Phineas then asks if everyone had a chance to try the transporter. He then remembers that Perry is not back yet, and so transports him back to the backyard. Just as Perry is about to press the self-destruct button on the Mime-inator, he is transported back to the boys' backyard. Luckily, as he is being transported, Candace yells at the boys and everyone looks at Candace instead of Perry, giving Perry enough time to change back to a mindless pet.

Candace rushes to the machine and inserts the picture of Linda into the machine, just as Linda is blindfolded and trying to hit a piñata. Linda starts running around the backyard, trying to hit the piñata without knowing she was transported back home. Candace tries to get Linda to look at the transporter, but Linda just continues to try to find the piñata.

Candace finally manages to stop Linda from running around by jumping onto her. This causes Linda to let go off the stick she used to hit the piñata. The stick ends up pressing the self-destruct button on the Mime-inator and both the Mime-inator and the transporter disappear. Linda then takes off her blindfold and thinks that she walked all the way home. She walks back into the house and asks if anyone wants some snacks, leaving Candace standing there, stunned and repeating the word "b-b-b-b-but" many times. The boys create a rap out of this. 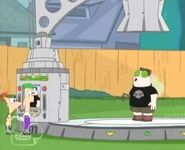