The Ocean, the Nautilus,
Pierre Aronnax is a scientist and professor of marine biology. He is the protagonist in Disney's 1954 film 20,000 Leagues Under the Sea.

Aronnax and his assistant, Conseil, were trying to reach Saigon, but due to reports of sea monsters, shipping was held up. He was invited by the U.S. government to join an expedition to determine once and for all if the monster existed, and he and Conseil accepted.

After a few months of searching, the ship was unexpectedly attacked by the monster. Aronnax and Ned Land both fell overboard, and Conseil jumped into the water to help them, the ship unable to rescue them. Aronnax and Conseil drifted towards the monster, which Aronnax discovered was a submarine, which he was keen to explore. Ned arrived shortly after, he and Conseil keen to get out. However, Aronnax was too distracted by the submarine and was spotted. He, Conseil, and Ned were all captured.

Nemo quickly invited Aronnax to join him in the Nautilus, but Aronnax initially refused due to Nemo's desire to leave Ned and Conseil to drown. After Aronnax proved his loyalty to his friends, Nemo brought all three aboard the submarine. Aronnax was fascinated and felt that Nemo needed to share his technology with the world.

Aronnax's fascination soon came into conflict with the interests of Ned, who was more concerned about getting off the submarine than the science associated with it. Aronnax focused more on his own objectives, leaving Conseil to look after Ned.

At one point, Nemo invited Conseil to join him on an expedition to a beach, during which time he got a glimpse of a prison camp known as Rura Penthe. Nemo explained that it belonged to a "hated nation" who was sending dangerous weapons to an unidentified destination. When they returned to the submarine, Nemo tried to get Aronnax, Conseil, and Ned into their quarters, but they managed to break out and witness Nemo sinking the ship. All three were angry, but Aronnax continued to try and persuade Nemo.

Finally, the Nautilus reached the island of Vulcania. Nemo revealed to Aronnax that he had intended to use him as an emissary as part of his plan to share his secrets with the rest of the world. Unfortunately for both, an unidentified fleet of ships had arrived and begun attacking the island. Aronnax was furious when he learned that they had been led by bottles sent by Ned.

When Nemo was wounded after planting a bomb on the island, Aronnax was present as he announced his intentions to let the Nautilus sink. Aronnax tried to persuade Nemo to change his mind, hoping that they could continue with his dream, but Nemo realized that it would be impossible for the moment, though there may still be hope for the future.

Aronnax and Conseil were both locked in their quarters, but Ned managed to fight back against the crew and freed both of them. After Ned took control of the Nautilus and the submarine began flooding, Aronnax tried to return to his quarters to recover his journal, but was knocked out by Ned, who brought him onto the longboat, along with Conseil and Esmeralda. Aronnax regained consciousness shortly after. Ned Land apologized for what he did, and the two managed to reconcile their differences.

Aronnax is last seen in the longboat with Conseil and Ned, and his ultimate fate is never explicitly revealed. However, since he is the one narrating the film and telling the story to the audience, it is most likely that he and his companions survived and were eventually rescued by a passing ship.

Nemo and Aronnax admire the ocean

Pierre and Conseil spooked by the Giant Squid's tentacles 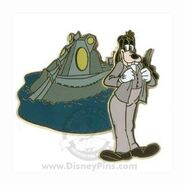