Pinocchio's Daring Journey is a dark ride at the Disneyland, Tokyo Disneyland, and Disneyland Paris theme parks. Located in Fantasyland, this ride is based on Disney's animated film version of the classic story.

The version in Disneyland was the first attraction created by Disney to use holographic material, which appears on a hand-held mirror in the scene where Lampwick turns into a donkey on Pleasure Island. The Pepper's Ghost illusion (used extensively in the Haunted Mansion) is used when the Blue Fairy disappears, leaving a pile of fiber-optic fairy dust on the floor.

Originally, Pinocchio's Daring Journey was conceived for a proposed Disneyland area adjacent to Fantasyland called Dumbo's Circus Land. Although it was roughly the same ride as what would finally open, it also would have featured a small puppet theater in the queue. However, Dumbo's Circus Land never came to be. Sometime later, however, it was finally slated to be added to Fantasyland proper, as part of a major overhaul to the land in 1983, replacing the Fantasyland Theater. A copy of the ride was also concurrently built as part of Tokyo Disneyland, which opened with that park a month and a half before Disneyland's version.

Guests board a woodcarver's cart and enter Stromboli's Puppet Theater. Pinocchio dances and sings with the puppets on the stage until the car goes through the theater's backstage area. Stromboli has placed Pinocchio and several other puppets in cages and Jiminy Cricket yells, "Look out!" as the car enters a giant cage itself.

After escaping the puppet theater, the car travels to Pleasure Island and through all of its fun stuff until they enter the Pool Room, where Lampwick is seen turning into a donkey. The other punished children, now transformed into donkeys, are locked in crates.

Once escaping from Pleasure Island, the car follows a sign that reads "To the Sea" and seagulls appear in the sky while Monstro lunges up from the sea in the direction of the vehicles.

Having avoided Monstro, the cars arrive safely in the Pinocchio Village, where they see the wishing star in the sky while an instrumental version of "When You Wish Upon a Star" is heard.

The cars then enter the ride's final scene, inside Geppetto's Workshop, where Geppetto, Figaro, Cleo, Jiminy, and the various toys, clocks, puppets, music boxes, and objects in the shop are all celebrating Pinocchio's triumphant return home.

The cars then arrive at the unload area, where the guests exit the attraction. 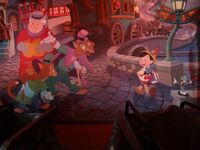 Pinocchio dancing on stage with the Dutch and French puppets.

Lampwick as he appears in Pinocchio's Daring Journey 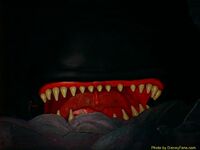 The Donkeys Boys in cages, sold into child slavery.
Add a photo to this gallery

Retrieved from "https://disney.fandom.com/wiki/Pinocchio%27s_Daring_Journey?oldid=4518907"
Community content is available under CC-BY-SA unless otherwise noted.