It is decorated with murals and images depicting characters from the 1940 animated feature Pinocchio. Its menu includes flatbread pizza, pasta, and chicken.

Pinocchio Village Haus opened with the Magic Kingdom in 1971. Despite the Italian setting of the film, the restaurant would end up taking on much more of a Bavarian/Swiss architectural style.

One of the more notable features of the Magic Kingdom version is the Monstro Room, which features windows overlooking the load area for the neighboring It's a Small World attraction. Additionally, there is outdoor balcony seating.

The restaurant was originally called Village Inn Restaurant when it opened on May 25, 1983. But other than the name change not much has been changed over the years except the menu.

Since February 24, 2017,[2] the restaurant was re-themed to Red Rose Taverne, a Beauty and the Beast themed restaurant,[3] complete with a new menu featuring American food with French twists, plus entirely redesigned decor that replaces the usual “Pinocchio”-inspired atmosphere with Belle, Gaston, Cogsworth, Lumiere, and Mrs. Potts.

Inside the French-style decorations, with nods to The Tavern (similar to Gaston's Tavern at Magic Kingdom and upcoming Tokyo Disneyland), Beast's Castle, and Belle’s provincial little town. It was initially to only be open for a limited time in celebration of the new movie, but remained in the overlay into 2018, with the statement on the official Disneyland website that it was only for a limited time being removed. 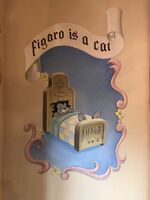 Retrieved from "https://disney.fandom.com/wiki/Pinocchio_Village_Haus_Restaurant?oldid=4072041"
Community content is available under CC-BY-SA unless otherwise noted.