Stephen Kay (2014-present)
Piper Lisa Perabo is an American stage, film, and television actress. She is known for several roles such as Annie Walker in the USA spy drama series Covert Affairs and Nora Baker in the 2003 comedy Cheaper by the Dozen.

Piper Perabo at premiere of Beverly Hills Chihuahua in September 2008. 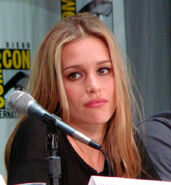 Piper Perabo speaks at the Notorious panel at the 2016 Summer TCA Tour.

Piper Perabo attending the 2019 Tribeca Film Fest.
Add a photo to this gallery
Retrieved from "https://disney.fandom.com/wiki/Piper_Perabo?oldid=3808956"
Community content is available under CC-BY-SA unless otherwise noted.