Pirates of the Caribbean: Tales of the Code: Wedlocked

“First, your return to shore was not part of our negotiations nor our agreement, so I must do nothing. And secondly, you must be a pirate for the Pirate's Code to apply, and you're not. And thirdly, the Code is more what you'd call guidelines than actual rules.”
―Hector Barbossa[src]

The Pirate's Code, commonly referred to as simply the Code, is a code of conduct invented outlining the proper rules of engagement and protocol both on and off the high seas, among governing pirates. It played a role in Pirates of the Caribbean: The Curse of the Black Pearl and continued in some of the sequels, particularly At World's End.

Set forth by Morgan and Bartholomew, the Code was chronicled into the Pirata Codex, a large book containing the rules for pirates occasionally followed. Captain Teague, the Keeper of the Code, believed the Code is the law. However, for pirates like Hector Barbossa, the Code is more like "guidelines" than actual rules.

When the Black Pearl attacked, pirates invaded the Governor's mansion, lured by the medallion that Elizabeth Swann wore around her neck. After being found by pirates Pintel and Ragetti, Elizabeth invoked the right of parley, showing her knowledge of the Code of the Brethren. Despite Ragetti saying "To blazes with the Code," Pintel complied with Elizabeth's request, saying "We must honor the Code." After Elizabeth negotiated with Captain Barbossa aboard the Black Pearl, Barbossa kept Elizabeth on board, at which point Elizabeth reminded Barbossa that he had to take her to shore. However, Barbossa noted several loopholes, including that the Pirate's Code wouldn't apply to her because she's not a pirate, and noted that the Code were "guidelines" than rules before welcoming her aboard the Black Pearl.

Before Jack Sparrow and Will Turner headed into Isla de Muerta, Joshamee Gibbs asked Jack what if the worse should happen. Jack replied, "Keep to the Code", an order Gibbs followed without further question. Will Turner overheard this exchanged and inquired about the Code to Jack as they rowed through the island's dark grotto. Jack told Will, "Any man who falls behind is left behind." Thinking that Jack was going to betray him, Will Turner knocked Jack out-cold with an oar before leaving with Elizabeth Swann and left him at the mercy of Barbossa's crew. When Gibbs asked Will for Jack's whereabouts, Will only answered that he fell behind. The Code gave the pirates no other options: Gibbs told the crew to keep to the Code as they prepared to make sail.

When Jack Sparrow was caught by Barbossa's crew, he called for parley, angering Pintel who already heard it from Elizabeth before. Later, after the cursed crew of the Black Pearl recovered the medallion, Pintel threatened the captured members of Jack's crew if any of the who even thought of the word "parley" before being sent to the brig. While mopping the brig, Pintel told Will Turner of how his father Bootstrap Bill was feeling guilty of what Barbossa's crew did to Jack Sparrow, saying it wasn't right with the Code. For that reason, Bootstrap sent a piece of the gold to Will, so Barbossa's crew would remain cursed.

During the battle of Isla de Muerta, Elizabeth Swann rescued Jack's crew from the brig and tried to convince them to join her in rescuing Will. But Jack Sparrow owed his crew a ship and Gibbs pointed out there was the Code to consider. "The Code? You're pirates. Hang the Code, and hang the rules! They're more like guidelines anyway," Elizabeth shouted, quoting Barbossa. However, Elizabeth rowed toward Isla de Muerta alone, saying "Bloody pirates" as the Black Pearl sailed away. Later, the Black Pearl arrived as Jack Sparrow fell into the Port Royal harbor. After being pulled on board, Jack inquired about Gibbs keeping to the Code. Gibbs said, "We figured they were more actual guidelines," before helping Jack to his feet.

While the Code isn't mentioned in the film, Jack Sparrow does reference it. In the fight for the Dead Man's Chest, James Norrington took the chest and led Davy Jones' crew away from Elizabeth Swann and Jack's crew. Joshamee Gibbs asks Jack what happened to the former commodore, in which Jack simply answered "Fell behind", implying the "Any man who falls behind is left behind" in the first film.

After Sao Feng was betrayed by the East India Trading Company, Hector Barbossa mentioned that it was a shame the EITC were not bound to honor the code of the Brethren before convincing the Pirate Lord to join the pirates. Barbossa once again mentioned the Code after both Elizabeth Swann and Jack Sparrow proposed that the Brethren Court must fight against the EITC, saying that an act of war could only be declared by the Pirate King. Despite Jack's protest of Barbossa making it up, Barbossa called on Captain Teague, the Keeper of the Code. One of Sri Sumbhajee's aides expressed the Pirate Lord's disagreement, but ended up shot by Captain Teague, who said "The Code is the law."

The Pirata Codex, a book with embossed covers and weighing around eighty pounds, was then brought out. Almost all the assembled pirates stared in awe by the Code's presence, particularly Pintel and Ragetti. Captain Teague unlocked the Code using the key guarded by the Prison Dog. Reading through the Codex, Teague concluded that Barbossa was right, much to Jack's astonishment. This resulted in Jack calling for a vote, in which all pirates voted for themselves except for Jack, who voted for Elizabeth Swann. When the lords argued against the vote, Jack asked "Am I to understand that you lot will not be keeping to the code, then?" in which Captain Teague glared, forcing the Pirate Lords to follow Captain Swann.

Tales of the Code: Wedlocked

The Auctioneer cited the Pirate Code, regarding trading Scarlett and Giselle fair and square, before the pirate Mungard said "Aye, the Code be the law as always. And woe to anyone who shows it any disrespect." Shortly afterwards, Mungard turned around towards with his pistols, freaking the crowd out, as the Auctioneer held the Code on him while saying this was the doing of one man: Jack Sparrow. Hearing the name Sparrow, Mungard turned around, asking "Where?" before firing his pistol. The bullet hits the Pirate Code, causing the Auctioneer (still holding the book in front of him) to fall backwards to the ground. Everyone, including Mungard, stared in shock of what just happened.

The pirates whispered amongst themselves about Mungard having shot the Code, with one of them saying "Captain Teague'll have his head." A group of pirates helped the dazed Auctioneer to his feet as Mungard ordered to lock up the Code, saying if anyone spoke of this, he'll have their tongue. The Code was carried towards a chest and locked in it.

The Pirate's Code is not spoken of, given that LEGO games do not have dialogue. Despite this, the LEGO version of the Pirata Codex makes an appearance.

Decorated for the showing of Pirates of the Caribbean: At World's End, the El Capitan Theatre had an exclusive exhibit featuring authentic props and costumes from the film. The Pirata Codex book was among the props displayed. 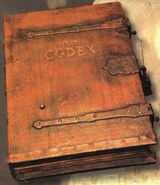 Captain Teague reads from the Code.

The Auctioneer holding the Code.