Disney Wiki
Register
Don't have an account?
Sign In
Advertisement
in: Character groups, Once Upon a Time characters, Villains,
and 26 more
English

This article is about the pirates from Peter Pan. For other pirates, see Pirate Crew (disambiguation).

House of Mouse
Once Upon a Time
A Poem Is...

The Pirate Crew are Captain Hook's henchmen in the 1953 film, Peter Pan. 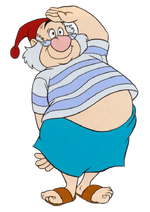 Mr. Smee is Captain Hook's loyal first mate, though his bumbling behavior often prevents him from being much help. Contrast to his megalomaniacal captain, Smee is soft-spoken and genial. He nevertheless enjoys piracy, and longs to abandon Neverland in favor of returning to a life of plunder along the seven seas.

Turk a member of Captain Hook's pirate crew, this fat mustachioed pirate carrying a razor-sharp sabre was (at some point after 2001) transported to Wasteland, where he served under the Animatronic Hook. When most of the Tortooga Pirates were taken over by the Pirate Conversion Machine and turned into monsters, Turk, along with several other pirates, escaped Tortooga and tried to make a new life for themselves in Ventureland, finally letting go of their thuggish ways. In Ventureland, Turk met the love of his life, Henrietta, which finished turning him around.

Black Murphy is a fearsome two-timing scoundrel. Murphy's weapon of choice is a dagger often clenched between his teeth. Murphy is among the members of Hook's crew who particularly resent being stuck in Neverland and wishes they'd return to ordinary plunder and pillage.

Mullins Mullins is as unpleasant and murderous a character as the rest of his shipmates.

Bill Jukes is older than most other crew members, but don't let his peg-leg and shortness fool you — he is far from the least dangerous pirate aboard.

Starkey is best-known for his habit of fighting with two blades at a time (a sword and a dagger). Fearsome in battle, Mr. Starkey is however quite a superstitious man, and at least at first he was hesitant to fight the apparently-supernatural Peter Pan.

Wibbles is as unpleasant and murderous a character as the rest of his shipmates, known for using a sword and gun simultaneously.

Mr. Tattoo is a heavily tattooed man was taken by Hook as an example of his special offer of giving new crew-members a free tattoo when he was trying to entice the Darling children and the Lost Boys to join him.

Skylights was unusually philosophical about the pirate condition, conscious that it was a thrilling but often quite short kind of life. This he conveyed through endless discordant singing, which so got on the nerves of the Captain that Skylights' lyrics were prematurely validated by an annoyed Hook shooting Skylights stone-dead to stop the singing already.

Mr. Chef worked as a chef on the Jolly Roger. He was rarely ever seen out of the ship's kitchens. It is unknown if he still works for Captain Hook, or if he was fired or killed or reformed. 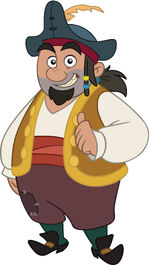 Sharky is nonetheless loyal to Captain Hook and eagerly obeys him to the best of his abilities. Much of Sharky's past hadn't been revealed until season four of the series, where it is revealed he is the last member of the Dark-Shark Clan a tribe of ninja like warriors task with guarding Never Land from a monstrous shark like creature known as the Shudder thought to be trying to destroy Never Land. It's currently unknown why Sharky despite his origin and background serves under Captain Hook.

Bones is nonetheless loyal to Captain Hook and eagerly obeys him as best as he can. While he does have his moments when he prefers to play music over following Hook's command, as seen in the episode "Escape from Belch Mountain", when Hook entrusts the Jolly Roger to both Sharky and Bones, who quickly begin playing a catchy musical number once Hook is gone, which accidentally reveals Hook's plot to Jake and his crew, who over hear hiding near by. Bones is definitely considered the dimmest of Hook's crew, but over the course of the series, has rare moments of intelligence.

The Parrot is the pet of Captain Hook. The Parrot's appearance may have been similar to José Carioca, except he had a peg leg.

The crew is first seen on their ship, the Jolly Roger, in Neverland, singing "A Pirate's Life (Is a Wonderful Life)". Although they served under Captain Hook, it is implied that they grew bored of him, because they spent their time in the aforementioned song throwing swords at a crudely drawn picture labeled "Captain" that was drawn on the cabin door. When Smee, the first mate, comes out of the cabin, he wishes them a good morning, but they grab him by the shirt and tell him that there's nothing good about the morning because they're stuck on Neverland. Wishing to give up the quest for Peter Pan, they bully Smee into trying to convince Captain Hook to leave Neverland. One of them is then shown in the rigging with an accordion, singing (rather badly) until an annoyed Captain Hook offhandedly shoots him with a flintlock pistol for interrupting his concentration.

Later on, when Peter Pan, Wendy, John, and Michael return to Neverland, one of the crew spots them and Hook orders the crew to shoot the cannons at them. The crew tries to shoot at them, knowing that the sooner Peter dies, the sooner they all get to leave Neverland. Luckily, they manage to escape. Later on, after Captain Hook has an encounter with Peter Pan, he manages to capture his fairy friend, Tinker Bell and tricks her into telling him where his hideout, Hangman's Tree, is and then he locks her up in a lantern and takes the crew with him to Hangman's Tree with a bomb wrapped as a present for Peter from Wendy. When Hook, Smee, and the crew arrive there, they hear Wendy singing "Your Mother and Mine". Here, the crew, among with Smee, is shown to be visibly sad, implying that they lost their mothers at an early age and it was this that drove them to become pirates. When Wendy, John, Michael, and the Lost Boys come out to return home, they are captured by the crew, who take them back to the ship while Hook and Smee stay behind to put the bomb inside for Peter.

On the ship, the crew sings to the children about joining them or walking the plank. Wendy tells Captain Hook that they will never join them. They tie the boys up, take Wendy to the plank, and make her walk to the end and fell down to the sea. Captain Hook listen for the splash, but no sound comes. Unbeknownst to the crew, Peter saved Wendy just in time before she landed in the water, for he survived the bomb thanks to Tinker Bell going to his rescue upon escaping from the lantern upon learning of it. Still mad at his crew who were fearfully believed that the ship was bewitched, Captain Hook then throws one of them, Starkey, into the sea. He then learns that Peter is still alive. Then he and Peter start the sword fight. Peter released the boys to join the battle. Captain Hook order his crew to get them. John told the Lost Boys to fire the crew with their weapons, but the crew is ready to climb to the net to battle them. Tinker Bell gets Peter to tell him they are in trouble. Using his dagger, he flies to the net to cut the rope and the crew falls down to the rowboat with Smee and head to the sea. They're then rowing the boat away from Neverland while Captain Hook was swimming away by his nemesis, the crocodile.

In Return to Neverland, the crew still listens to Captain Hook and actually come with him to London to kidnap Wendy. However, they accidentally kidnap her daughter, Jane, (perhaps because they were not aware of the change of time since time has virtually stopped in Neverland). They follow Captain Hook's orders to the letter, as they join him in searching for Peter Pan and the Lost Boys. They also join him in the search of his treasure chest and the fight against Jane and the Lost Boys. Near the end of the film, the crew (along with Captain Hook and Smee) is chased away by the octopus (who imagines them all to be different kinds of fish).

Tinker Bell and the Pirate Fairy

Several members of Captain Hook's pirate crew appear in this film as secondary characters. Given names and speaking parts, this movie is functionally a prequel for the pirates prior to the events of Peter Pan. Several members of the crew are recognizable, despite the switch to 3D animation, post-Return to Neverland. The only notable difference is the number of crewmates and their noticeable youth.

Aside from Tinker Bell herself, this is the first occurrence of Disney characters making the jump from 2-to-3-D animation. Following this, Ralph Breaks the Internet also incorporated previously 2-D characters.

In House of Mouse, the crew appears in a cameo with Captain Hook and Mr. Smee. They sing "It's Our House Now" with the Disney villains in Mickey's House of Villains.

The crew appears in the second season on the show, in flashbacks concerning Captain Hook. One is when he meets Milah, Rumplestiltskin's ex-wife loses his hand by facing the crocodile and the other is when he meets Baelfire at Neverland.

In Kingdom Hearts: Birth by Sleep, Smee is on the boat in Ventus' story of the game and he calls out to the crew to fire cannonballs at Ventus and Peter. The part of the crew in Kingdom Hearts is played by numerous Heartless instead of the original characters, presumably having been disposed of once Hook joined Maleficent's alliance.

The crew's Wasteland counterparts once lived in Tortooga until Captain Hook was forcibly converted into a Beetleworx at Skull Island and many of them were captured and converted as well. Smee and a few others, including Damien Salt and Scurvy Pat, escaped to Venture Land and have been trying to settle in there.

The crew is seen during the Peter Pan's Flight mini-game. They are first seen holding Cubby hostage in an attempt to learn the whereabouts of Peter Pan. When he and the player arrive, however, Captain Hook orders his crew to attack. They do so by blasting cannons at both Peter and the player. By reflecting the cannonballs, the player is able to defeat the crew and go after Captain Hook.

The Disney Wiki has a collection of images and media related to Pirate Crew (Peter Pan).