Still standing
Pirate Island is a mysterious spot in Disney's TaleSpin. Its location, known only by the Air Pirates, serves as Don Karnage's stronghold and the hidden den of the Iron Vulture. Suspected of housing formidable defenses as well as the Air Pirates' treasures, weapons, planes, and belongings, Pirate Island provides the Air Pirates with a place of refuge — not to mention a concealed base of operations, from which Don Karnage can launch attacks on cargo shipments, spy on the outside world, and plot mischief.

Pirate Island is just one in a cluster of volcanic islands far from Cape Suzette. Enshrouded in mist and fog from the frequently gloomy weather, these uncharted islands are rather difficult to locate without precise navigation. Sea gulls, buzzards, and sparse pine trees are the only signs of life on the desolate peaks. Many flyers and sailors purposely steer clear of this foreboding region, making it the perfect area for the Air Pirates to establish their secret lair.

For secrecy's sake, Pirate Island is located not behind the volcanoes but inside one of them.

It is unknown how much of the tunnels are natural, and how much are dug by the pirates themselves, as there are various booby-traps throughout many of the tunnels.

The exact location of Pirate Island is the Air Pirates' single most carefully-kept secret, and outsiders never find their way, exept for Baloo once, who was directed by former air pirate Kit Cloudkicker.

Camouflage is the crucial element in keeping the Air Pirates' presence on Pirate Island a secret. The Air Pirates hide the main entrance to their base behind a pair of massive doors on one side of the island. Covered with a phony rock surface, these motorized doors open in response to a special signal from the Iron Vulture's radio transmitter, revealing an immense cavern within the island large enough to hold the airship, with room to spare for additional vessels. The pirates use a small tugboat to guide the Vulture to a loading dock at the far end of the cave, and to turn the ship around for takeoff.

Sea-based aircraft may use the secondary "back door" entrance on the other side of the mountain. Entering Pirate Island this way involves a tricky flight into a thick fog bank covering what, from above, appears to be nothing but solid rock. However, aerial approach at a low angle — cutting under the fog — reveals a series of rocks arranged like a rib cage.

Beyond these obstacles lies a watery inlet, emptying into an underground stream which leads straight through the mountain. The Air Pirates leave this entrance deserted most of the time, using it only when they need to dispatch pirate transports or when the main entrance is somehow inaccessible.

The back-entrance tunnel is dangerously full of booby-traps and natural hazards.

Things look different coming out from the inside; a tunnel from the pirates' workshop provides an alternate path to the back entrance, ending right where the more hazardous, more apparent route begins (where the paths join is impossible to tell in the shadows).

Practically all the Air Pirates' mechanical experiments and repairs take place in the workshop. Supervised by pirate mechanic Ratchet, the workshop provides the pirates with enough space and materials to rebuild, equip, and maintain machines as large as aircraft. A giant furnace, used for melting down metals, feeds directly into a vent in the top of the island, brilliantly masking the furnace exhaust as volcanic smoke. Crates and scattered bundles of treasure lie strewn about the workshop until transferred to other areas. Railroad tracks run from the shop to the vast main cavern for transporting planes, ammunition, and supplies to and from the waiting Iron Vulture. Another tunnel in the far wall leads to Pirate Island's back entrance.

Few prisoners get to visit Pirate Island, as the Iron Vulture has cells aplenty in its brig. Karnage may decide, however, that an important captive must be whisked away to the pirates' lair for safe keeping until ransom is paid. Those who've been unlucky guests of the Air Pirates report that the base is almost completely deserted when Karnage and company are out on a heist; only a handful of slow-witted guards remain.

Other portions of Pirate Island include storage rooms for weapons, fuel, and foodstuffs; a kitchen and mess hall; training and recreation areas; and personal quarters for the pirates (including Don Karnage). Torches are chosen for illumination and warmth over electric lamps, as running a generator and power grid large enough to light up the whole base would be impractical.

On the rare days when the weather clears, Don Karnage seizes the opportunity to soak up the sun's rays. A carved stone balcony, one of the captain's favorite spots to relax, once overlooked the ocean from the west face of Pirate Island — Karnage often spent entire afternoons basking in the sun there, with underlings attending to his every whim. An unfortunate brush with the Iron Vulture has since reduced the outcropping to rubble.

Unwary trespassers and would-be escapees will stumble across dozens of unpleasant surprises in the Air Pirates' island home — spikes shooting from the ceiling, collapsing floors, even metal jaw traps popping out of cobbled footpaths. These fiendishly clever, exceptionally dangerous snares are concentrated along the paths leading to the island's back entrance, the most likely escape route.

While most of the traps are set off by tripwires and floor triggers (easy enough to circumvent, if you're not in any particular hurry), some traps are manually activated and may help the pirates slow down intruders. An alarm system wired throughout the complex sounds either as a warning, or as a general alert when the Iron Vulture is leaving or returning to the base.

Taking into consideration the risk of prisoners escaping or travellers stumbling upon Pirate Island, Don Karnage has installed powerful outer defenses into the Air Pirates' fortress. Hidden behind panels in the sides and top of the volcano, accurate artillery guns can fire long-range shells at intruding aircraft and ships (not to mention pesky summer clouds interfering with Karnage's outdoor tanning breaks).

The ear-splitting wail of the base sirens can mean only one thing: Karnage is returning

The Prince of Pirates at ease in his favorite lounge chair. 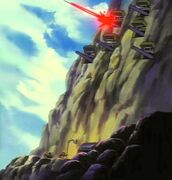