The Pixar Ball, or the Luxo Ball, is a yellow ball with a blue stripe and red star that first appeared in the Luxo, Jr. short as a prop for Luxo, Jr. Since its debut, it has made numerous cameos in other Pixar films, most prominently in the Toy Story films.

A boy bouncing the ball in Toy Story

The alternate opening of The Incredibles

The Membership pages of World of Cars Online

A tile on Sunnyside Daycare has the yellow surface, blue stripe, and red star of the ball.

The ball in a web short for Inside Out

The ball is in 22's box right near the entrance to the astral plane in Soul.

The Pixar Ball in Forky Asks a Question: "What is Time?" 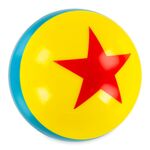