This renovation was a part of the 2009 Paradise Pier placemaking including the Silly Symphony Swings, World of Color, Goofy's Sky School, The Little Mermaid: Ariel's Undersea Adventure, Games of the Boardwalk retheming, the removal of Maliboomer, and enhancements on California Screamin'.

When Pixar Pier was announced, it was announced that Mickey's Fun Wheel would again be rebranded, though still retain the iconic Mickey Mouse face.

Pixar Pal-A-Round is an eccentric wheel, differing from conventional Ferris wheels in that 16 of its 24 gondolas ride on interior rails so that they slide inward and outward as the wheel rotates.[2][4] This results in a more intense experience,[2] and motion sickness bags are provided in each gondola due to the disorienting nature of the ride. The other eight gondolas are fixed to the rim of the wheel and do not slide. Guests may choose to ride in sliding or fixed gondolas, each of which can carry six people.[2][4]

One of the subprojects was to retheme the former Sun Wheel as the new Mickey's Fun Wheel. The ride experience has not been significantly changed, but the sun face has been replaced by a giant Mickey Mouse head, the color scheme was changed from mainly yellow to mainly red, and each gondola now has a picture of Mickey, Minnie Mouse, Donald Duck, Pluto, or Goofy (each done in a style resembling their opening face cards from the cartoons) to be consistent with the introduction of classic Disney characters into Paradise Pier, the area where the attraction is located. In addition, new LED lighting effects now illuminate the attraction, and some Victorian theming echoes the elaborate architecture of the nearby Toy Story Midway Mania! attraction.

In 2013, additional lights were installed around the back of Mickey's Head on the Fun Wheel for World of Color: Winter Dreams along with a huge LED lighting package that was installed on California Screamin' behind the Wheel. Steve Davison revealed during an interview after the premiere of Winter Dreams that the new lights installed on Fun Wheel and California Screamin' are a permanent addition and will be used in future World of Color updates.[6]

On November 2nd, 2017, Disney announced that Mickey's Fun Wheel would be updated to include Pixar Characters on the gondolas with Mickey's face remaining on the side facing Paradise Bay. The attraction was scheduled to be closed on January 8th, 2018 along with other Paradise Pier offerings scheduled to be transformed as part of Disney's Pixar Pier.[7]

Mickey's Fun Wheel during the performance of World of Color

Mickey's Fun Wheel during the day 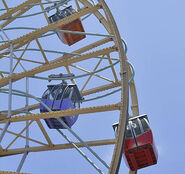 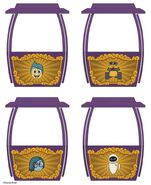 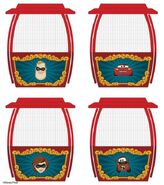 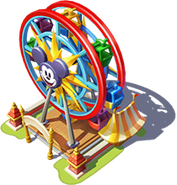 Retrieved from "https://disney.fandom.com/wiki/Pixar_Pal-A-Round?oldid=3817776"
Community content is available under CC-BY-SA unless otherwise noted.