Half of Paradise Pier

Pixar Pier is a Pixar-themed area at Disney California Adventure, which replaced half of Paradise Pier.[1][2]

Pixar Pier opened during the limited-time Pixar Fest celebration, which began April 13, 2018. The celebration included the new “Together Forever: A Pixar Nighttime Spectacular” fireworks as well as the return of Pixar Play Parade and “Paint the Night” parade, and more. Here’s the official description:

"When Pixar Pier opens along the southern shore of Paradise Bay, with newly themed attractions, foods and merchandise throughout. This new, permanent land in the area that is now Paradise Pier will introduce four new neighborhoods representing beloved Disney·Pixar stories."

The four neighborhoods are themed around three Pixar movies: The Incredibles, Toy Story, and Inside Out. A fourth section will “be a celebration of many of your favorite Pixar stories”. 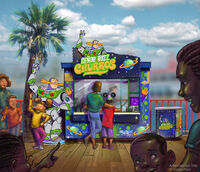 Retrieved from "https://disney.fandom.com/wiki/Pixar_Pier?oldid=4015704"
Community content is available under CC-BY-SA unless otherwise noted.