Due to the park's large construction phase, the parade went on hiatus starting on January 4, 2011. It was originally set to return in November,[1] but did not as construction was still ongoing. During the hiatus, it was replaced by "Pixar Pals", an interactive show with characters from Monsters, Inc. and The Incredibles. Pixar Play Parade reopened on June 15, 2012 for the grand reopening of Disney California Adventure.

In January 2011, a similar parade called Pixar Pals: Countdown To Fun! debuted at Disney's Hollywood Studios. This parade reused floats from Block Party Bash and used the same theme tune as the Pixar Play Parade. However, it was retired in April of 2013.

On July 15, 2017, at D23 Expo, it was officially announced that the Pixar Play Parade would be moving from Disney California Adventure Park to Disneyland as part of the "Pixar Fest" event. It was later announced that the parade would now open with a float of Luxo Jr. and introduce new floats based on Up and Inside Out. The parade's run was announced to end at the end of Pixar Fest in September, but was later extended into November 4, 2018 in order to allow for Mickey's Soundsational Parade to undergo refurbishment. 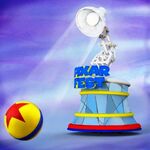 Concept Art for The Incredibles Unit 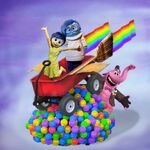 Concept Art for Inside Out Unit

Concept Art for Up Unit