Disney Wiki
Register
Don't have an account?
Sign In
Advertisement
in: Objects, Magical Objects, Created by Magic,
and 14 more
English

Various (mainly to give fairies and others the power of flight)

“All it takes is faith and trust... Oh! And something I forgot: Dust. Just a little bit of pixie dust.”
―Peter Pan

Pixie Dust is a magical golden glitter-like powder that grants the abilities of flight. Many think that flight is fueled by "happy thoughts", and this idea has been used in the Peter Pan movies and Hook, but in reality Peter Pan was actually joking with Wendy, John, and Michael Darling when he told them to think happy thoughts.

There are two types of dust: golden dust and blue dust. From the movies, "pixie dust" flows from the heart of the Pixie Dust Tree. From the books, following the Pixie Dust Tree's destruction, "fairy dust" is created by grinding the molten features of Mother Dove. In its common appearance, Pixie Dust is nothing more than a golden, sparkling powder. This dust comes from special blue pixie dust which replenishes the supply. As a golden color, it enables pixies to fly. Blue dust is shown to be a powerful augment and rejuvenator. However, there are other colors of pixie dust revealed/created in the movies, such as green, pink, orange, cyan, amber, and purple, each granting a fairy a talent or augmenting one. If a fairy's wings get wet, pixie dust cannot replenish them until they are dry.

Blue Pixie Dust is the most powerful of them all, as if infused within a regular maple tree it can turn it into a special one by making it produce regular golden Pixie Dust as soon the Blue Pixie Dust is dropping inside it. The process of growing Pixie Dust Trees was discovered by an extremely gifted and powerful dust-keeper named Zarina.

This is called "Pixie Dust Alchemy" and was invented by an extremely gifted dust-keeper fairy named Zarina.

When a fairy changes his/her talent, the only way to revert back to their original is to be sprinkled with the dust related to it.

Originally shown in Peter Pan, Pixie dust apparently comes from the fairy Tinker Bell through her wings. It allows Peter's friends to fly away from London to Neverland.

A greatly more powerful version of Fairy Dust. It is capable of granting flight to the user if they believe, and the ability to find a soulmate for a person in need of love. David Nolan once described the potency as "nuclear fairy dust."

It can either be highly refined from Fairy Dust or retrieved from the trees of Neverland. When Pan's youth was close to expiring, the trees no longer had any Pixie Dust; likely his breaking of Neverland's rules of only visiting in dreams caused too much strain on the world to continue production of it.

In the Disney Fairies franchise, it is shown to come from a reservoir in Pixie Hollow and evenly portioned out to every fairy in Never Land by the Dust-Talent fairy, Terence. Not only that, but Pixie Dust is needed for fairies to be able to fly and use their magic.

In Never Land, every eight years, when the moon turns blue, is a celebration called the Autumn Revelry, during which a Fairy is chosen from a Guild to create a scepter, which will hold the Moonstone, which, when the blue moon shines its light through the moonstone, creates blue Pixie Dust, which also rejuvenates the pixie dust tree.

In Jake and the Never Land Pirates, Peter Pan asks the fairies to bestow Izzy with a small pouch of Pixie dust which is used in emergencies only, however she did have to use it one time when her crew (Jake, Skully, and Cubby) lost Bucky in a race against Captain Hook. In the episode "Pixie Dust Away!", Izzy loses all her pixie dust in the Never Sea. The Fairies inform Izzy and the other young pirates that they can restore their supply by visiting the Fountain of Forever which produces Pixie dust all year round.

In The Pirate Fairy, both the golden-yellow and blue pixie dust can be merged together with the help of a special ingredient to make various colors of pixie dust; each possessing its very own magical properties. Zarina uses the variously colored experimented pixie dust to switch Tinker Bell and her friends' talents. 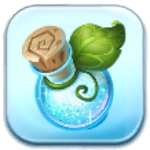 A bottle of pixie dust complete with a cork 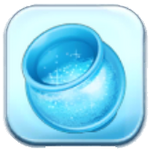