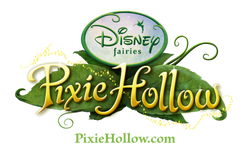 Pixie Hollow was an MMORPG created by the Walt Disney Company and released September 8, 2008. The basic version of the game was free to play online. The website was based partly on the Disney Fairies books written by Gail Carson Levine. Players with free accounts could create a female fairy or male sparrow man avatar who each came with a small selection of furnishings to decorate a virtual room. Basic accounts could make friends with other players and had access to both 'speed' chat with pre-selected phrases and full chat where they were able to type their own messages. They could also play various "Talent Games," or fairy themed mini-games, found in the various meadows and forests of Pixie Hollow. While playing, the player could pick up leaves, seeds and flowers which were the currency for buying items in the game. Players could also play games and visit places to earn badges that they could see in their "leaf journal," which also served as a handbook and inventory. Players could purchase a monthly, semi-annual or annual membership which allowed access to additional features, such as the ability to make or buy additional clothes and furniture for the player's avatar and buy furniture to decorate a virtual room. In January 2012, "Pixie Diamonds" were introduced, an in-game currency that could be purchased with real-world money and used to buy or upgrade items without an active membership. Though the website was geared towards young girls, male players could create sparrowman avatars, and on April 22, 2010, the game introduced a male character named Slate; he was referred to as a "Sparrow Man" rather than a male fairy.

It was confirmed that the game, along with Toontown Online and Pirates of the Caribbean Online, would be closed in the Fall of 2013. All three games are now closed.

Prior to November 10, 2011, you could create up to three fairies or sparrow men. After that date, you could only create one fairy per Disney account. There was a minimal amount of hairstyles that you could start with, but you could get more later as you collected ingredients. You could also choose one of these talents for your fairy or sparrow man: Tinker, Water, Garden, Light, and Animal.

There were quests that you could accept from famous fairies such as Tinker Bell, Silvermist, Rosetta, Iridessa, Fawn, Kit, Marina, and Elixa.

There were also mini-games scattered all around Pixie Holllow.

There was always something to look forward to in Pixie Hollow! Special Events were held where players could celebrate with their Fairy friends. Some events also featured special collections for purchase released in shops, free special items available to all players and special badges.