The Pixie Hollow Games
Pixie Hollow Bake Off (also known as Tinker Bell: Pixie Hollow Bake Off) is a six minute short that aired in the United Kingdom on October 20, 2013, on Disney Channel. Staring Celebrity Masterchef Lisa Faulkner who voiced head baking fairy Gelata in this fun-packed tale of the Disney Fairies dusting off their cooking skills.

Tink challenges Gelata to see who can bake the best cake for the queen's party.

There are a group of baking fairies, the main one being Gelata (Lisa Faulkner in the UK version and by Giada De Laurentiis in the US version). The baking fairies always make exactly the same cake for Queen Clarion's Arrival Day party, for the last 399 years.

Tinker Bell has an idea for a different kind of cake, which Gelata takes as a challenge... hence, the bake off. Tink and her friends (The Non-Baking Fairies) compete against the baking fairies. In the end, Tink's cake looks very appealing, but finds out looks aren't everything. 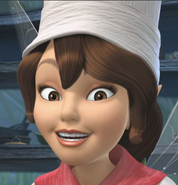 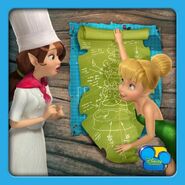