Hunting for gold and devouring it

Petrified
The Pixiu is a minor antagonist that appears in DuckTales. It is a mystical dragon who can sniff out and consume gold.

The origins of Pixiu are unknown, but it is said that it hunted and stole gold in ancient times. Eventually it was imprisoned in stone with a magic gong and discovered by Scrooge McDuck. It could only be released by ringing the gong three times.

In the first episode, Webby led Huey, Dewey, and Louie to Scrooge's garage where Pixiu was being kept. They accidentally awaken three ancient evils. The gong is hit once by the Deus Excalibur and a second time by a headless horse. After Scrooge beats the evils, he hits the gong with his cane and unintentionally releases Pixiu.

Pixiu sniffs out the gold in the Money Bin and starts to fly after it. Scrooge grabs his tail and rides on him while flying through Duckburg. Scrooge persistently holds on despite the dragon's attempts to shake him off. As they get closer to the bin Scrooge tries to stop it, but Pixiu threw him off. Although Pixiu managed to enter the Money Bin and came close to devouring the gold, it is ultimately turned back into a statue when Scrooge touched it with the Medusa Gauntlet.

Pixiu in the show's opening 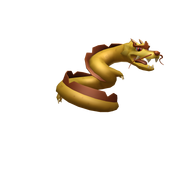