“What a spaceport!”
―Buzz Lightyear, upon entering the restaurant

Pizza Planet is a family pizza restaurant frequented by Andy Davis and his toys in the 1995 Disney/Pixar animated film, Toy Story. The establishment is identifiable by its unique design employing a space theme.

The building of Pizza Planet is shaped like a cartoon depiction of a ringed planet, with a close resemblance to the real planet Saturn, but differently colored with the "Pizza Planet" logo on top. To the left of the restaurant is a rocket ship and launching site. In the interior, a lot of arcades and electronic games are seen.

In an early version of the film, the pizza parlor had a miniature golf theme. When Buzz Lightyear entered the picture, the Pixar designers turned it into Pizza Planet, an elaborate space-themed drive-in that Buzz could mistake for a spaceport and his ticket home. It also supplied the name and logo for the Pizza Planet delivery truck, which went on to make cameos in several Pixar films.

“You are clear to enter. Welcome to Pizza Planet!”
―Robots outside the entrance of Pizza Planet whenever guests stop by to enter the building

In the first Toy Story, his is the place where Woody and Buzz Lightyear attempt to find Andy after being left behind at the Dinoco gas station. After Woody spots a Pizza Planet delivery truck pulling into the gas station, he calls Buzz back, and the two hitch a ride in the truck and head to Pizza Planet. After entering the restaurant, Woody finds Andy and calls to Buzz that they will jump into Molly's stroller, but Buzz, still believing to be a real Space Ranger, spots a rocket-shaped claw game, thinking it is a rocket Woody has promised that will take him to his destination (due to the way Woody was describing the stroller in a way Buzz would understand), and climb into the rocket, where he meets the Aliens. Woody has to climb into the claw game to get Buzz out, but Sid Phillips, who has been playing Whack-an-Alien, takes control of the claw and fishes Buzz, as well as Woody who has been holding onto Buzz's leg, out of the rocket (but not before he has fished one alien out). Buzz, Woody, and the alien are then taken to Sid's house to become his new toys, where the latter is given to Sid's dog, Scud, to be chewed up.

In Toy Story 3, Andy mentions his once-favorite restaurant, Pizza Planet, as the home world of his three Aliens that he hands over to Bonnie. There is also a "Pizza Planet"-branded season schedule (likely for high school baseball/softball) hidden on Andy's wall.

In Toy Story 4, the character of Forky is made from Pizza Planet eating utensils.

In the episode "At Large on a Small Planet", an ambassador from Gargantia plans on opening a Pizza Planet restaurant on his home planet, and invites Buzz and Booster to appear at the grand opening.

In Onward, Pizza Planet appears in the film under the name "Pizza Realm", to match the suburban fantasy world setting.

"You are clear to enter. Welcome to Pizza Planet." 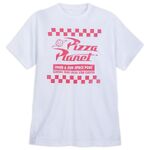 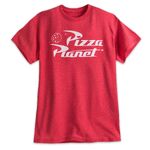 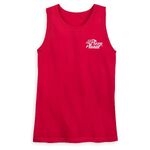 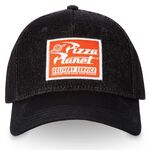 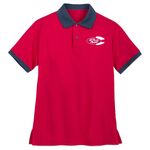 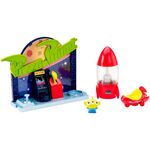 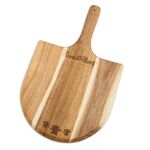 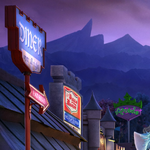