The Pizza Planet Truck is a 1978 Gyoza Mark VII Lite Hauler pickup truck that is used to make deliveries for Pizza Planet in Toy Story. It has made cameos in every Pixar film to date except The Incredibles. It does, however, appear in its video game.

The inside of this truck is first shown in the first Toy Story film. Buzz decides to go into the cockpit while Woody decides to go into the cargo. In the truck are empty soda cans, a brown toolbox, some cups, and a food storage container. When the truck goes uphill, all the items begin to roll and slide toward the back. Woody screams as the brown toolbox slides toward him.

Toy Story
At the Dinoco gas station. Buzz and Woody ride in it.

A Bug's Life
Next to the mobile home above Bug City. John Lasseter says in the DVD commentary that he likes to think of it as being the place where the delivery guy in Toy Story lives.

Toy Story 2
In the Cutting Boulevard apartment parking lot. The toys actually drive the truck to follow Al to the airport.

Monsters, Inc.
When Randall is banished, the truck can be seen parked outside the mobile home.
(This is the same trailer as in A Bug's Life.)

Cars
During the "Life is a Highway" sequence, in front of a Dinoco station, thus echoing the scene in Toy Story.

Cars
At the Los Angeles International Speedway at the title deciding race. His name is Todd.

Ratatouille
On a bridge in the background of the document chase scene.

WALL-E
Briefly seen when EVE scans it for plant life.

Up
Seen parked on the curb as Carl's house floats away near the beginning. It should be noted that in Up, the truck has a different shape, and looks more cartoonish.

Up
Seen coming out of the parking lot when Russell is being lowered from Carl's house.

Up
Seen in the parking lot behind the curb where Russell and Carl are sitting at the end.

Toy Story 3
Lotso, Chuckles, and Big Baby ride on the Pizza Planet truck's rear bumper in the rain at night to get from Daisy's house to Sunnyside Daycare during Chuckles' story.

Cars 2
Todd has been spotted in the Cars 2 triptych poster, in the middle London portion, near a fountain in the background.

Cars 2
Todd on the LCD television at the Wheel Well Motel.

Brave
As a wooden trinket on a worktable in the Witch's cottage, as a way to bypass the fact Brave is set before cars were invented. This is the first time the truck does not appear as a real truck.

Monsters University
Parked next to the JΘX house at the first party. It receives some modifications to fit the monster world, like a six-wheel configuration, more pointy lights, and different proportions.

Inside Out
The truck appears in a gold memory orb in the foreground when Joy and Sadness first meet Bing Bong. Director Pete Docter says the Pizza Planet Truck appears a total of three times in the film, but that it is very hard to see.[5][6]

Inside Out
The truck's second appearance, which appears in a memory orb just like the others.

Inside Out
The truck's third appearance when Bing Bong, Joy, and Sadness successfully depart the Train of Thought.

The Good Dinosaur
As an asteroid in the opening shot, in the top left portion of the frame. Peter Sohn has indicated that the truck makes a second appearance in the film, which has not yet been identified.[7]

Finding Dory
The truck appears in a wrecked sunken state in the area where Dory, Marlin, and Nemo encounter the Giant Squid.

Cars 3
Todd in the demolition derby.

Cars 3
A car crashes into Todd who loses his rocket in the crowd.

Coco
Seen driving past when Miguel looks outside the window.

Incredibles 2
Seen parked in an alley after Elastigirl defeated the false Screenslaver, indicating that the Pizza Man whom Evelyn abducted worked there.

Toy Story 4
As a tattoo on Axel the Carnie's leg as he spots Buzz Lightyear and picks him up.

Onward
At the toll gate when Ian and Barley start their adventure by heading to the Manticore's Tavern. The text on the rocket reads "Pizza Realm", as to keep in tone with the fantasy theme.
Add a photo to this gallery

Toy Story of Terror!
Depicted on a Pizza Planet flyer posted on the wall in Ron the manager's office.

Toy Story That Time Forgot
Made of LEGOs, in Mason's house.
Add a photo to this gallery

The Incredibles: The Video Game

The Incredibles video game in the third level.

LEGO The Incredibles next to a guy in a banana costume.
Add a photo to this gallery 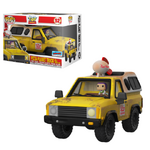 Todd die-cast vehicle.
Add a photo to this gallery

Retrieved from "https://disney.fandom.com/wiki/Pizza_Planet_Truck?oldid=3990786"
Community content is available under CC-BY-SA unless otherwise noted.