Marge Simpson takes Maggie to a park for toddlers. When another baby goes down the slide and almost crashes into her, she is saved by a boy named Hudson. Maggie becomes smitten with Hudson, and the two play games together, which Maggie fantasizes as a whirlwind romance. At the end of the day, Maggie gives Hudson her blue bow to remember her by, and that night she dreams about Hudson in her sleep. The next day, Homer looks after Maggie instead of Marge, and he takes her to a different park with food trucks. Maggie sees Hudson waiting for her in the adjacent park and desperately tries to get his attention, but Homer pulls her away before she can. That night, Maggie drowns her sorrows in baby formula and becomes despondent over not being able to see Hudson.

The next day, Homer babysits Maggie again. Before he can take her to the same park as the day before, Maggie grabs hold of the car's steering wheel and steers it into the park where she met Hudson. She sees him boarding a train for children and runs across the park to catch up with him. When Hudson sees Maggie trying to catch up with the train, he reaches out to her with her blue bow, but she fails to catch up before the train pulls away out of her reach. Maggie believes Hudson is gone forever, but the train (running on a circular closed track) loops around to the station at which it started. Maggie and Hudson reunite on the train's cowcatcher, and they exchange pacifiers (in lieu of sharing a kiss).

Playdate with Destiny was first announced to the public on the show's official Instagram on February 27, 2020.[9] It was revealed that the short would be shown in theaters in the United States prior to screenings of the film Onward, starting on March 6, 2020, making the first time a short film out of a 20th Century Studios property preceded a Disney film since 21st Century Fox was bought by Disney on March 20, 2019.[9] This is reflected in the short's intro showing a silhouette of Mickey Mouse before transitioning to Homer Simpson holding two donuts. The short film was released for streaming on Disney+ on April 10, 2020. 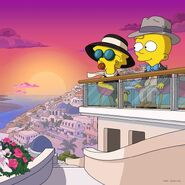 Retrieved from "https://disney.fandom.com/wiki/Playdate_with_Destiny?oldid=4007602"
Community content is available under CC-BY-SA unless otherwise noted.