Playhouse Disney started on the Disney Channel on May 8, 1997. However, it did not use its actual on-screen logo until 1999. In spring 2001, it re-launched with new graphics. On October 7, 2002, the block re-launched with a new logo and an animated yellow clay ball named "Clay" (voiced by Debi Derryberry) whose catchphrases were "It's true!" and "Are you with me?" Clay would often morph himself into different things.

The previous programming announcer was actress Allyce Beasley. On January 1, 2007, it received substantial upgrades to its on-air presence. At this time, "Clay" was replaced by two monkey hosts, Ooh and Aah. Every summer since 2007, usually starting sometime in May, Playhouse Disney's end time on weekdays aired only four hours. Disney Channel's original series are aired over this time slot during the change of lineup. On weekends, Playhouse Disney still aired six hours.

When Playhouse Disney originally launched in the United Kingdom, it used live presentation and links, being set in a large "Playhouse" featuring different rooms and areas. This presentation format was also used for Playhouse Disney in Australia, Spain, Portugal, France, Italy, Germany and several other territories outside North America.

Playhouse Disney UK's main live presenters were Dave Benson Phillips and Alex Lovell, who were referred to as Big Dave and Little Alex. In addition to presenting the "Playhouse" (the channel's main continuity strand), both Dave and Alex presented "Music Time", where they sang mostly Disney songs, with the original recordings of the songs. Dave also presented the children's cookery show, Bite Size, alongside Sophie Aldred and Karl Woolley and puppet Mitzi the Oven Glove.

Two other segments were also featured. The first was "Circle Time", presented by Jason Canning, where he alongside a few children, made up stories from animated drawings that viewers sent in. The other was "Art Play", presented by Sara-Louise Harper, which featured her and a few children creating a piece of artwork based on a popular Disney movie.

New graphics and a new logo were introduced in March 2003, coinciding with the debut of the main Disney Channel's new look, although the "Playhouse" format was kept the same.

In Early 2004, the format of the channel was changed significantly. With this, Jason Canning was axed from the channel, removing the 'Circle Time' segment in the process. Art Play was kept, but the presenting role was taken by Olivia Bonnici after Sara-Louise Harper became pregnant in Late 2002. A dedicated nighttime block called "PJ's Bedtime " was introduced, being presented by Olivia and Big Dave. While the "Playhouse" format would remain for the next few years, the channel's presentation gradually began to focus more on out-of-vision links, like what its American counterpart would use.

On 27 August 2006, Dave Benson Philips and Alex Lovell were axed from the channel. the Art Play and Music Time strands were removed around the same time. The two remaining strands, PJ's Bedtime and Bite Size, were removed in November 2007 and May 2008, respectively. By then, the channel featured a format and identity in-par with its American counterpart.

In September 2007, the channel logo in the external promotionals (programme press releases, promos for terrestrial television) were changed to include the inscription "Channel" as in all Playhouse Disney Europe channels, but on the channel itself the logo was not changed. This move was to differentiate the channel from the "Playhouse Disney" block, shown all mornings on the american Disney Channel.

Presenters were re-added to the channel in September 2009, with new presenters Samantha Pearl and James Sherwood presenting on air between 6pm and 8pm.

On May 26, 2010, it was announced that the block as part of a new rebranding strategy would be renamed "Disney Junior", and a new 24-hour channel replaced Disney-owned SOAPNet in the United States on March 23, 2012. International channels with the Playhouse Disney name were also changed to the Disney Junior rebranding in 2011. Playhouse Disney ended its 14-year run on February 13, 2011, and Disney Junior started the next day. 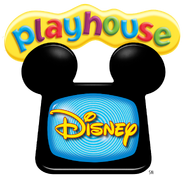 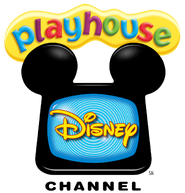 The Playhouse set for most international continuity 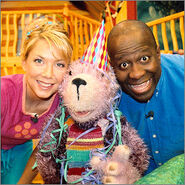 PJ's Bedtime strand
Add a photo to this gallery