A lighter version of Pluto with a white robe, a pair of wings and a bright golden halo atop his head

To have Pluto do good

Goodness, Pluto taking his side

"Kindness to animals, my friend, will be rewarded in the end."
Pluto's Angel is the inner goodness in Pluto's heart. He is the good side of Pluto's conscience, he is a supporting protagonist and made his first appearance in "Mickey's Pal Pluto".

Pluto's Angel first appears in the cartoon "Mickey's Pal Pluto". After Mickey, Minnie and Pluto adopted stray kittens, the Angel appears and convinces Pluto to enjoys his new company. All of that changes when the Devil interferes and Pluto switches sides believing Mickey has left him for the kittens. When the kittens are trapped in the well, Angel attempts to convince Pluto to do right but is trapped in his halo by the Devil. Having had enough, he frees himself, takes off his wings and imprisons the devil in a trash can before telling Pluto to save the kittens.

Later on, he goes to appear in the Oscar-winning short "Lend a Paw." Like his previous appearance, he stops the Devil from antagonizing Pluto and has him befriend a stray kitten. In the end, the Angel congratulates Pluto for his good deed. Here in his first color appearance, he is also given a makeover; he is now given a white robe and a bright golden halo on top of his head.

In the cartoon "Pluto's Kittens", the Angel returns as Pluto kicks out some stray kittens after Mickey blamed him for the mess they caused. The Angel demands Pluto to rescue them which he does after nearly watching them drown. In this cartoon, he is given a blue color and his wings are short. He also made another appearance in "Minnie Takes Care of Pluto", telling Pluto that Minnie has, always and will love him with care.

Pluto's Angel makes a special appearance in the episode "Pluto vs. Figaro". When Figaro acts too playful for Pluto, the Angel informs him that he must be patient with his assistant.

Pluto's Angel makes a brief appearance in the episode "Easy Street". When Pluto's Devil suggests that Pluto rip up Mickey's slippers and blame Goofy for it, Pluto's Angel appears and in a rare instance where he agrees with Pluto's Devil, exclaims, "Amen!" 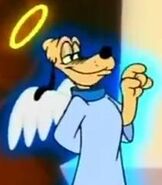 Pluto's Angel in House of Mouse.

Pluto's Angel in Mickey Mouse.
Add a photo to this gallery
Retrieved from "https://disney.fandom.com/wiki/Pluto%27s_Angel?oldid=3580162"
Community content is available under CC-BY-SA unless otherwise noted.