The Goddess of Spring

Pitchforks
Pluto's Minions are minor characters and are Pluto's imp minions in the Silly Symphonies short, The Goddess of Spring.

They are small, black imps with red short horns, hands, feet, and bellies, as well as grinning mouths of white teeth and long forked tails.

Like the rest in the mythology, they have devilish personality, such as being bad and mischievous.

The imps are first seen when Pluto ascends from beneath the earth on a rotating platform and, as his demons chase away Persephone's elf friends. Pluto takes her to the Underworld, where dozens of imps celebrate. One imp gives Pluto a crown to Persephone to make her his queen; one plays on a hellish organ whilst others dance in circles around a crater spewing fire behind them. They are not seen after that. 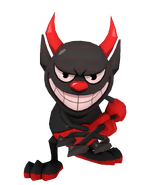