Pocahontas
Pocahontas II: Journey to a New World is a 1998 straight-to-video animated film as a sequel to the Disney film Pocahontas. The film is inspired by the true events of Pocahontas after her encounter with John Smith. While in the first film her romance is focused on John Smith, the sequel involves her deep romantic love and affection for the Englishman that she had married in real life, known as John Rolfe.

Set several years after the original film (circa 1610-1614), John Smith (voiced in the sequel by Donal Gibson) has been presumed dead in a plot by Governor Ratcliffe, the villain from the original film, to declare war against the Powhatan Nation back in the New World. In order to prevent such a happening, a young diplomat, John Rolfe, is sent to bring Chief Powhatan to King James for negotiations. In the New World, Pocahontas's old friend Nakoma seems to be married. Pocahontas is still mourning John Smith's death. She eventually decides to move on and buries his compass in the snow. A while later, John Rolfe's ship arrives. By now, civilians from England have settled in Jamestown and rush to meet the boat. Pocahontas curiously joins them. After an incident with a biased settler and a near-battle between the warriors and settlers, Pocahontas meets Rolfe face-to-face but they don't take a liking to each other. Pocahontas is annoyed by Rolfe for interfering in her attempt to stop the skirmish and Rolfe dislikes Pocahontas for rebuking him because of said interference. Rolfe later overhears two women talking about Pocahontas preventing a war. Rolfe then assumes "Pocahontas" is the name of the Chief of the Powhatans.

That night at a dance in the Indian village, Rolfe intrudes with a gift of a horse for "The Mighty Pocahontas." When Pocahontas steps forward, Rolfe finds himself in an awkward situation: the stubborn Chief will not go to England, but war will break out unless an envoy is sent. Pocahontas volunteers, despite Rolfe having doubts and a native saying bad disadvantages. Later on, Pocahontas asks for advice from Grandmother Willow, who tells her to "listen to the spirit within."

The next day, Pocahontas sets off for England with Meeko, Flit, and Percy stowing away on the ship and a bodyguard sent by the Chief (known as Uttamatomakkin). While on the ship, the captain nearly arrested Pocahontas for harboring stowaways, but Rolfe saves her. Then Rolfe and Pocahontas come to a truce, and perhaps this is where the first sparks of a strong and deep blossoming romance appear.

Upon arriving in England, Pocahontas is astounded by this "new world." But at the height of her fun, Ratcliffe appears and grins evilly when he finds out it's Pocahontas as an ambassador, a lowly woman, instead of the Chief (actually the first time in the whole story where Ratcliffe and Pocahontas meet face to face). He hands Rolfe a proclamation that King James has signed that says an Armada will sail if he is not pleased with the ambassador sent from the Americas. Rolfe and Pocahontas set out for his estate outside of London, where Mrs. Jenkins (it's never said whether she is a housekeeper or a relative) happily greets them and puts on tea (which she constantly does throughout the film as her trademark solution to a problem). Rolfe goes off to meet with King James I alone. The King, tricked by Ratcliffe, invites Pocahontas and Rolfe to The Hunt Ball. If Pocahontas can impress the King and Queen, her people will be saved. If she is deemed "uncivilized", however, then the Armada will sail.

Rolfe is very doubtful about the plan, but Pocahontas is determined to impress King James and Queen Anne at the ball. In the meantime, Pocahontas and Mrs. Jenkins are upstairs getting Pocahontas ready for the ball, putting on a corset, a hoop skirt, and high heels. Rolfe then teaches her to dance and act in front of English society. When John Rolfe gives Pocahontas a necklace, she takes off her mother's and puts on the new one, thereby abandoning herself to be molded into somebody she's not. Meanwhile, Ratcliffe arranges with a jester from the court for something that will guarantee to make waves with Pocahontas. Pocahontas is powdered to look white and dressed in a yellow ballgown and attends the ball. For the first half, she delights the King with some flattery and pleases the Queen (who had always seemed to be an open-minded person). But during dinner, Ratcliffe's plan is a success - during a bear-baiting, Pocahontas cannot stand by and watch an animal be tortured. She accuses the King of behaving like a savage (after James accuses Pocahontas of the same thing when she defends the bear). Offended, the King angrily orders the guards to arrest Pocahontas and Uttamatomakkin. Rolfe is left helpless; his hopes of peace have failed.

Meanwhile, in a sailor's tavern, a sailor talks about how the King plans to execute Pocahontas for insulting him. A hooded figure seems disturbed by this news and rides off. A little while later, Rolfe meets with this hooded stranger and plots with him to break Pocahontas out of jail. The plan is pulled off flawlessly, and Pocahontas is taken to a cabin in the middle of a forest, safe from harm. There, the hooded man is revealed to be John Smith, who had donned a disguise only to escape being convicted of treason. John Smith obviously wants to resume his romantic relationship with Pocahontas. But all Pocahontas can think of is the impending Armada and her people. Knowing that her people need to live, Smith wants her to stay hidden and therefore alive from being hanged, but Rolfe wants Pocahontas to listen to her heart. The two men start to argue. Upset by her dear and close friends fighting, Pocahontas runs off. Then Smith realizes Rolfe also is deeply romantically in love with Pocahontas.

Pocahontas remembers her best friend Nakoma's words and washes the powder from her face, willing to sacrifice herself for the good of her people. Rolfe supports her, but Smith is unsure. They return to London and go before the King. Although Pocahontas easily convinces the Queen of the truth, the King, being a personal friend of Ratcliffe, still has his doubts. But when John Smith steps on to the scene, the King realizes that Ratcliffe has lied to him about everything: from Smith's death to there being gold in Virginia. The King now understands, but he confesses the Armada is about to sail. Pocahontas, Uttamatomakkin, Smith, and Rolfe set out to stop the Armada. After the good guys knock most sailors overboard and cause the ships to crash together, Smith and Ratcliffe face off in a final swordfight. Smith wins and orders Ratcliffe to sheath his sword. Ratcliffe complies, but just as he does, he pulls a pistol on Smith and is about to shoot him dead when Rolfe and Pocahontas manage to trap Ratcliffe on a mast. Smith then grabs his sword and cuts the rope, therefore throwing Ratcliffe overboard. He is met on shore by King James, who has him arrested by his guards and dragged away despite the governor's pleas.

The next day, Smith is being decorated with praises and women, while Pocahontas tells Rolfe (who became lord advisor to the royal court) she plans to return home. Rolfe and Pocahontas are hinting at admitting their mutually strong romantic feelings for each other when Smith interrupts, telling Pocahontas he's been given a ship of his own and that he wants to travel the world with her by his side. Rolfe, thinking that Pocahontas loves Smith, leaves dismayed. Pocahontas declines, explaining that she wants to return to her family. Smith tells her that whatever path she chooses, he hopes that she will find happiness, and they part after he kisses her hand one last time, but when Pocahontas turns to find Rolfe, he is gone.

Pocahontas leaves England the next day, saying goodbye to Mrs. Jenkins, who says Rolfe is nowhere to be found. Pocahontas is saddened that she cannot say goodbye to Rolfe and see him one last time. Uttamatomakkin is staying in England with Mrs. Jenkins instead of going home with Pocahontas. As the ship leaves port, Rolfe reveals he is on board, and Pocahontas runs to his arms, happy to see him. Pocahontas reminds him about his duty to the King, but Rolfe says, "I have a duty to honor what is in my heart, Pocahontas," indicating that he resigned as adviser in order to stay and be with her. They share a romantic, passionate kiss as the ship sails into the sunset.

The film was met with negative reviews from critics. Review aggregator Rotten Tomatoes gave it a 29% "Rotten" rating based on 5 reviews.[1]

Pocahontas did travel to England in 1616, although at the time of her journey she had already been baptized and taken the Christian name Rebecca. Furthermore, she was already married to John Rolfe at the time, as well as the mother of his son, Thomas. She traveled to England accompanied by Rolfe, her son, Uttamatomakin, and a retinue of Native American women. While in the film she appears to have stayed in England for about a week or two, she actually remained in England until her death in March 1617. John Rolfe was certainly in love with her, as expressed in letters he wrote, but it is unknown whether Pocahontas loved him in return, or if she simply saw their marriage as a political alliance. The return voyage was halted before the ship made it to open sea as Pocahontas was too ill for them to continue; she died soon after and was buried at Gravesend, Kent on the Thames. Her son, Thomas, was also very sick but managed to survive and remained in London while his father continued on to Virginia. Rolfe died before he saw his son again.

In real life, Ratcliffe died in 1609, seven years before Pocahontas came to England. She did encounter John Smith during her stay, but was angry with him for betraying the kin relationship that her father had established with him.

During the "What A Day In London" sequence, a character appears who is evidently intended to be William Shakespeare. In reality, Shakespeare died on April 23, 1616; preceding Pocahontas arrival in London by two months on June 12, 1616. In the film, Shakespeare is depicted getting the idea for the line "to be, or not to be," but the play Hamlet had already been written by the time Pocahontas came to England. 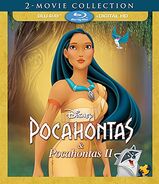