House of Mouse
Once Upon a Time
The 7D (cameo)
Descendants: Wicked World (cameo)

To send Snow White into the Sleeping Death

Sends Snow White into the Sleeping Death, but she is revived by the kiss of the Prince

Put anyone who bites into the sleeping death

Last seen falling from Snow White's lifeless hand, a small chunk bitten off of it

The Poisoned Apple is a magic blood-red apple which, when bitten, will send its victim into the Sleeping Death. A victim of that can only be revived by love's first kiss.

It is used by the Witch in an attempt to do away with Snow White in Snow White and the Seven Dwarfs. It is also well-known as her trademark object.

After turning into the old hag, the Evil Queen declares that Snow White should suffer "a special sort of death". Looking through her spellbook, she comes to the recipe for the Sleeping Death, and, reading of the poisoned apple's effects, decides that it's the perfect way to get rid of her. She brews the potion in her cauldron and dips an ordinary apple into it as the Raven watches silently. The Sleeping Death seeps into the apple, and the Witch raises it from the cauldron to reveal that the poison dripping from it has formed an image of a skull. The image fades as the apple turns from black to red, to tempt Snow White. The Witch cruelly offers it to the Raven, who backs away, terrified, causing her to cackle maliciously. She suddenly remembers that there may be an antidote to the Sleeping Death and searches through the spellbook, believing that "nothing must be overlooked". She soon discovers that the only cure is love's first kiss. Regardless, the Witch laughs it off, confident that the dwarfs will think Snow White is dead and they'll bury her alive and thus making her unable to receive a kiss. She puts the apple in a basket, and walks down through the dungeon below, emerging from the castle's catacombs in a raft. As she makes her way to the dwarfs' cottage, two sinister vultures see her, and sensing that her death is imminent, quietly pursue her. She reaches the cottage and, according to plan, finds that the dwarfs have left and Snow White is alone. Catching her by surprise as she is preparing food, the Witch offers her the apple, but is attacked by the forest animals (who sense danger when they notice the two vultures). Snow White does not recognize any danger in the old woman, unaware that she is actually the evil queen in disguise, and lets her into the house to offer her a drink of water, while the animals rush off to find the dwarfs. The Witch tells Snow White that the apple is a magic one that can grant wishes, and knowing of her romance with the Prince, persuades her to wish for a happy reunion before taking a bite. After some moaning, her body slumps to the floor as she falls into a coma induced by the Sleeping Death. The Witch's supposed victory is cut short when she is discovered by the dwarfs, who, led by Grumpy having been alerted by the forest animals to her presence, pursue her until she is cornered at the edge of a cliff, where she apparently falls to her doom, with her body believed to have been eaten by the vultures. It is unknown what happened to the apple, but it the dwarfs probably burned it. Though Snow White appears to be dead, the dwarfs can't bear to bury her, instead forging her a coffin made of glass and gold. The Prince hears of her current state, comes to the clearing where her coffin is placed, revives her with a kiss, and reverses the effects of the poison.

The poisoned apples are also used in House of Mouse, where they were referred to as Sleeping Apples.

In the episode "Jiminy Cricket", Snow White was about to eat a poisoned apple again, until Grumpy snatches it when Jiminy Cricket says to the audience "Don't eat apples unless you know where they came from".

In the episode "Gone Goofy", the Witch tricks Snow White into biting the Sleeping Apple again. When Iago sees Snow White falling asleep without finishing the apple, he asks Abu if he thinks anything is wrong with it and has him take a taste himself. When Abu falls victim to the Sleeping Apple's effects, Iago calls for a prince to kiss the monkey, at which point Prince John arrives.

The Sleeping Apple's notable appearance was in "Pluto Saves the Day", where Pete buys these apples from the Witch to put the House crew to sleep. Snow White found out about this plot however, and the only solution to reverse the effect of the poison is for Pluto to kiss the sleeping staff members. After that, the apples are advertised on the big screen.

In "Halloween With Hades", the Witch brings in a basket full of Sleeping Apples into the club, until Daisy Duck tells her that no outside food is allowed. She leaves the basket of apples at the reservation table. Then Gaston walks by and picks an apple, saying "No one eats candied apples like Gaston!" Before Daisy could even warn him, Gaston ate the apple and falls into a sleeping death.

The poisoned apples also appear in the animation/live action hybrid film Enchanted. At first, Queen Narissa ordered Nathaniel to kill Giselle with poisoned apples. When Nathaniel fails she goes to New York to finish the job, repeating the Queen's (and also The Witch's) roles in Snow White and the Seven Dwarfs.

The Poisoned Apple appears in ABC's Once Upon A time. It originated from the Sleeping Curse Maleficent created to use on Aurora, she later traded it for The Evil Queen's Dark Curse. The apple had the curse placed upon it so that if someone willingly bites into it, they will fall into a deep sleep while their body is their tomb and they are tormented by their regrets, all the while appearing to be dead. However, the Evil Queen was unaware that, as with all curses, it can be broken by true love's kiss.

At some point, the apple came into the possession of the Blind Witch and the Evil Queen sent Hansel and Gretel to retrieve it in exchange for the whereabouts of their father, the Woodcutter. The Evil Queen later offered the cursed apple to Snow White, who willingly bit into it, fully aware of the consequences in order to save the life of Prince Charming. Moments after Snow White bit the apple, she collapsed and dropped the apple. As it rolled away, it fell into a portal Jefferson had created in Storybrooke. Prince Charming later broke the Sleeping Curse and awoke Snow White.

After the Dark Curse was cast, Regina (The Evil Queen) contracted Jefferson to fetch the apple with his hat in exchange for forgetting his true identity. After retrieving the apple, the apple was made into an apple turnover by Regina who offers it to Emma Swan, who willingly accepts it unaware of the turnover's true nature. The turnover is later tasted by Henry Mills, sacrificing himself in order to save Emma while proving to her that there is indeed a curse hanging over Storybrooke. Once again, the sleeping curse is broken by true love's kiss—in this case Emma's maternal love for Henry. It is currently unknown what happens to the remains of the turnover following Emma taking it to hospital, believing it to be the cause of Henry's condition.

In the episode "For the Love of Cheese", Grim Gloom accidentally transforms himself into a frog, much to Hildy Gloom's repulsion. In order to revert the spell, Hildy searches her Big Book of Spells, where the poisoned apple is briefly seen.

In the Episode "7D and the Beast", Queen Delightful gets a basket of poisoned apples from Hildy disguised as an old lady. Sir Yipsalot scares that hag away.

Return to the Isle of the Lost

In Return to the Isle of the Lost, this Fruit of Venon it was hanging from the Toxic Tree on a tiny island that is surrounded by a poisonous lake (which could only be crossed by stepping stones). The isle was guarded by a pink tiger and the isle itself could only be reached by going into the interior of a cavern (which was guarded by crocodiles) which can be entered at the bottom of Doom Cave. The entire interior of the cavern was damp and had toxic air.

To acquire the talisman, Evie alone had to overcome the apple's power which was to make her think she was alone and uncared about by others. Evie had to convince herself that what she was being shown by the power of the apple (which while Evie slept caused her to dream that she was in her mother's room where the Magic Mirror was telling her nobody cared about her) was not true. After she realized that, she woke up.

A replica of the apple is seen the in the hands of a mannequin of the Evil Queen in the Auradon Museum.

The scene of the Witch preparing the poisoned apple was discussed in a story conference in 1936:

Walt Disney: "The thought just struck me on the buildup of the music where she says, "Now turn red, etc." Where it starts you might go into innocent, sweet music while she is saying something about how innocent it looks. The music changes as the apple changes and could stay that way until she says, "Have a bite." It would be a good contrast."

Richard Creedon: "Admiring the apple as if she'd like to eat it herself - "Pink as a maiden's blush."[1]

Both ideas were used in the final film; innocent music is playing when the apple turns red, and the Witch appears to admire it briefly before offering it cruelly to the Raven.

A very short sequence involving the Witch stirring her cauldron was fully animated and completed, and was among the scenes cut from the film by Walt Disney at the last minute. In the sequence, the Raven looks on as the Witch stirs the cauldron with a huge bone off an unknown animal. She pauses to see that the smoke rising from the brew is shaped like skulls, and adds a drop of an unknown ingredient to the concoction:

Smoke from the cauldron then begins to fill the room. This sequence would have occurred immediately after the scene of the Seven Dwarfs going to sleep in their cottage; the sequence would have been followed by the scene in which the Witch dips the apple into the brew to make it poisonous.

Dunking the apple into the poison

The witch showing the apple to the Raven

The remedy for the poisoned Apple

The Witch offering the Poisoned Apple to Snow White

The Poisoned Apple in Enchanted

The Poisoned Apple in The 7D

The Witch and the Raven in the deleted scene

Concept art for the Apple 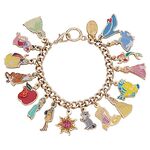 Retrieved from "https://disney.fandom.com/wiki/Poisoned_Apple?oldid=2989810"
Community content is available under CC-BY-SA unless otherwise noted.