She is an out-going and adventure-loving tadpole. She loves adventure, monsters, and fun. Although she is young, she has the heart of an adventurer. She is mysterious, explosive, and unpredictable.

She likes to attack stuff using either her flail and her rolling pin she named "Doris".

Polly resembles a real-life tadpole, except she has arms instead of legs. She has tyrian purple skin and wears a yellow bow with light yellow polka dots.

She moves in a wooden bucket filled with water and held together by a cylindrical steel frame. It has seen a fair amount of use apparent in its worn appearance.

Polly, for the most part, remains relatively unchanged throughout the series. She acts as something of an x factor in Anne and the Plantars' misadventures. One minor recurring plot thread is her wanting to eventually grow legs of her own. There is some support for this in "Marcy at the Gates" where Marcy informs Polly that she will most likely receive them in two months time; news that excites her so much that she demands to have it in writing.

Most of the conflict that happens with her is due to external problems, such as when she became self conscious about Anne's view of her in "Girl Time", which resulted in her briefly doubting her abilities. She also felt underappreciated in "Truck Stop Polly" when her family called her out on being so obtrusive. In both cases, she apologizes for any problems she caused while also forgiving them for not being considerate with her due to her youth.

Polly looks at Anne as a surrogate sister. Just like everyone else, she started off slightly put off by her appearance and demeanor, but slowly began to accept her. She can be belittling of Anne at certain times and questioning of her interests, but she still cares for her well being. Polly is shown to care about how Anne views her and was hurt when she insulted her in "Girl Time". It seems that Polly might be slightly envious of Anne because of her height and talents. They share a good bond with one another. Just like the citizens of Wartwood, Polly looks to Anne for protection against the dangers of the world.

Polly and Sprig have a typical sibling rivalry. Polly feels that she is better at handling situations than her older brother, which she can be correct about half the time. However, Polly really does look up to Sprig and appreciates his supportive influence. While she can be a handful for him, she cares about his well being and sometimes acts as Sprig's confidant; giving him advice, though she can sometimes purposefully misdirect him for her own amusement.

Polly loves her grandfather, but can sometimes feel stifled by him. While she is well aware that she is trying to protect her, she wants to prove that she can be independent from him and perform important tasks on her own. Being the only parental figure that she has, it is possible that she is trying to impress him. Polly and Hop Pop maintain a very healthy relationship even when things get too tense. 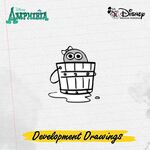 
Cite error: <ref> tags exist, but no <references/> tag was found
Retrieved from "https://disney.fandom.com/wiki/Polly_Plantar?oldid=4236650"
Community content is available under CC-BY-SA unless otherwise noted.