Lilo & Stitch 2: Stitch has a Glitch
"Winnie the Pooh"
Pooh's Heffalump Movie is a 2005 American animated film produced by the Disneytoon Studios, and released by Walt Disney Pictures and Buena Vista Pictures Distribution on February 11, 2005, exactly five years after The Tigger Movie.

Winnie the Pooh and his friends hear a strange noise and find a set of large, perfectly circular footprints in the Hundred Acre Wood (and, in Tigger's case, a major earthquake in the middle of the night, causing his family portrait to be severely damaged). They jump to the conclusion that the noise and prints are from a heffalump, and Rabbit organizes an expedition to go try to catch it; a disappointed Roo is told to stay behind, as everyone believes the expedition is too dangerous for one as young as he.

Roo slips out on his own in search of the heffalump, but unfortunately his rope falls into a river. When he goes to take it again, he loses his bag with his snacks, but he doesn't see it and goes to take his rope. Just then a proboscis comes out from the grass, and starts to vacuum up his snacks, Roo thinks its a heffalump, then he goes to looking for it, and soon finds one; a playful young four-footed creature named "Heffridge Trumpler Brompet Heffalump IV" (nicknamed "Lumpy"), who is lavender with a proboscis like an elephant, but being not much larger than Roo. Roo is afraid at first, but the two quickly become friends and play. After a while, Lumpy hears his mother calling for him to come home. Roo wants Lumpy to come home with him to meet all of his friends first, and they head towards the Hundred Acre Wood. When they get to the fence, Lumpy suddenly stops; thinking that the "creatures" that live there are scary. Roo reassures him and they return to the Hundred Acre Wood, which is deserted, as everyone else is still out searching for the heffalump. Roo and Lumpy soon become great friends and find that they're not so different after all. While playing, the two friends hear Lumpy's mother calling him to come home again. Lumpy and Roo search for his mother, but she is nowhere to be seen. Lumpy uses his trunk to call to her, but doesn't work. After hours of searching, Lumpy assumes that they will never find her, and starts to cry. Roo sings a part of a song to Lumpy, that his mother sang to him earlier in the film; which gives Roo an idea, they could go find his mother, and see if she can help Lumpy.

They soon find Kanga and the rest of the gang. Rabbit thinks that Lumpy has captured Roo, and the gang starts to chase Lumpy through the traps that were set up earlier in the film. All fails as Lumpy escapes through all the traps that they set up. Running after Lumpy, Roo gets caught in the last trap. A frightened Lumpy keeps on running, and escapes into the woods. Roo manages to get out of the trap, and runs to find Lumpy. He quickly sees that he is trapped in a giant cage. Lumpy is upset at Roo, telling him that he had broke his promise (Roo had said before that his friends wouldn't be frightening). Roo apologizes for everything, and explains that it is all his fault. He makes many attempts to break the cage, but to no avail. He then looks up, and soon sees that the only way to free his friend is to untie the rope holding the cage together. He climbs all the way to the top and unties the rope, freeing Lumpy. Lumpy, very happy that Roo had rescued him, trusts him again and and they hug. Kanga, who had saw the whole thing, peeks from behind a tree, and is amazed what Roo had done.

Then Rabbit, Pooh, Tigger, and Piglet come running around the corner, still thinking that Lumpy has captured Roo, and lasso Lumpy. Roo jumps on Lumpy's head, and yells at them to stop, and explains to his friends that Heffalumps aren't scary nor are they mean as they think. However, Lumpy starts to fall down a ditch and inadvertently sends Roo flying in the air and land into a pile of giant logs, reaching down to 50 feet. Realizing that this is all their fault, everyone, including Lumpy, try to save him, but nothing works. Lumpy then gets an idea, and tries to use his call to get his mother to come and save Roo. After a few tries, he finally gets his call right, and his mother finally comes and Lumpy said to her that Roo is trapped and ask to her if she can save him. She says yes and starts to launch away the barrels with her proboscis, then asks Roo if he can be firm. Roo tries to cling at Lumpy's mother's proboscis, but she says to him that he can't move, then she vacuums Roo up with her proboscis, Lumpy's mother is very proud that he found his call, and they hug. Meanwhile, Pooh makes a statement to Rabbit why the heffalump was in The Hundred Acre Wood; she was looking for her baby. The two, Tigger and Piglet then all apologize to Lumpy for their actions (meaning the way they've thought of and treated him), and he forgives them. Lumpy's mother tells him it's time to go home. He says goodbye to Roo, but the latter comes with an idea; He pleads to his Mom, "Just a bit longer?" and Roo and Lumpy play together. The movie ends, and the end credits show that everybody, even Christopher Robin, is now best friends with Lumpy.

The film was not very successful at the American box office, making just $5,805,559 in its opening weekend for an average of only $2,296 from 2,529 theaters, The film ended up with a final gross of $18,098,433 in North America, which is the worst for all the 4 Pooh movies that went to theaters, even adjusting for inflation. However, the film did much better in foreign markets, managing to make $34,760,000 internationally, bringing the total worldwide gross to $52,858,433, thereby making the film a giant success, since the film took just $20 million to make. Despite the tepid box office numbers, reviews were generally positive, resulting in a "Certified Fresh" rating of 79% on Rotten Tomatoes, 68% by the audience, and a 6.4 (out of 10) on the Internet Movie Database. 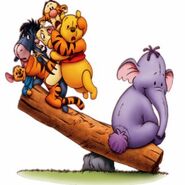 Retrieved from "https://disney.fandom.com/wiki/Pooh%27s_Heffalump_Movie?oldid=3930746"
Community content is available under CC-BY-SA unless otherwise noted.