Stephen Root
Pop Pop Porter is a minor character from the animated television show Kim Possible. He is voiced by Stephen Root. He is short and overweight. He wears a black business suit and has gray hair.

Pop Pop is one of the five richest people in the world. He revolutionized the heat-and-eat snack industry, with his Pop Pop's Mini Corn Dogs. These are mini corn dogs which are Never fried but Flash-frozen.

Señor Senior, Senior regularly has him and the three other richest people in the world (including Martin Smarty) over to play cards. 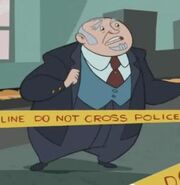