Mufasa from The Lion King

Buck (older son)
Libby (daughter)
Arlo (younger son)
Poppa Henry is a supporting character in the 2015 Disney/Pixar animated feature film, The Good Dinosaur. He was the father of Arlo, Buck, and Libby, and the mate of Momma Ida.

"Brave and selfless, Poppa is a devoted husband and father, working tirelessly to make a life for his family on their farm. He has a soft spot for Arlo, his small and fearful son, and takes special care of him as he grows up. Poppa believes in Arlo and knows that with enough perseverance, Arlo can overcome his fear and make his mark."[1]

Poppa Henry is first seen removing trees and plowing his new soon-to-be cornfield while his mate, Momma Ida helps him plant the seeds next to their farm. A few weeks later, after Henry finishes watering the field, Ida calls him to inform him that "it's time"; meaning that she and Henry are about to become parents to three children, much to their joy.

First, they witness the birth of their daughter they name Libby, then their son, Buck (whom he later scolds at for maliciously spanking his brother), and finally, their second son, Arlo. A few years later, after the children have grown a little older, Henry catches Arlo before he can unintentionally fall into the river after running away scared from the chickens. To make him feel better, Henry tells him he doesn't have to like the chickens just feed them.

When Henry finishes building the corn silo to protect it from critters who might eat from it and makes his mark with Ida, their children try to do the same but he reminds them that in order to make their marks, each one has to earn it by doing something big, bigger than themselves; much to his and especially, Arlo's eagerness.

A couple of more years go by and after Buck clears a field and Libby plows the new open field properly, Henry and Ida allow them to earn their marks. With every fear and failure, Arlo is the only one left with a mark unearned and Ida seems rather concerned with his phobias especially with the chickens he is charged with feeding every day. Nevertheless, Henry never gives up on his son. After Buck messes and teases Arlo, Henry, in the company of his wife and daughter, scolds Buck and comes to Arlo's defense even when Arlo almost gives up.

To encourage Arlo not to give up on his dream of earning his mark, Henry takes him out one night to show him how to overcome his fears and have fun with fireflies. In order to give Arlo a sense of purpose, Henry puts him in charge of guarding their silo against critters and helps him set up a trap. While Arlo is on guard, the trap manages to capture a feral caveboy but Arlo doesn't have the heart to kill him and sets him free. Heavily disappointed, Henry has Arlo accompany him to track the caveboy through a ravine, where a storm begins. However, after Arlo trips on a rock and injures his leg, Henry, feeling regretful for how mad he was at Arlo and realizing what his obsession with catching the critter led to, decides to turn back just as a flash flood occurs and a massive rapid appears, but Henry only manages to save Arlo before he is swept away and killed. Afterward, a grave of Henry is placed into Arlo's family farm, where life becomes very challenging for Arlo's family without Henry's help. Due to this, Arlo also has to work more to help his mother with the cornfield before winter starts. He then meets the caveboy again, and chases him angrily, blaming him for his father's death.

Days later, after Arlo has been separated from his family and has been attacked by Thunderclap and his gang when trying to save the critter named Spot from them, Henry appears in Arlo's vision of leading him away and back toward home, but Arlo admits his friendship with Spot and resolves to save him, which makes his father proud before he fades away.

Poppa Henry appearing as a ghost to Arlo 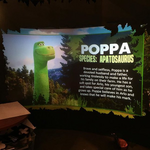 Retrieved from "https://disney.fandom.com/wiki/Poppa_Henry?oldid=4487281"
Community content is available under CC-BY-SA unless otherwise noted.