Porco Rosso
Porco's Plane is single engine fighter seaplane that appears in the film Porco Rosso. According to Porco, this is the only plane of its kind ever built and was abandoned after being declared too dangerous for a pilot to fly. Porco found it covered in dust in a warehouse and was able to master it.

She was eventually shot down by Donald Curtis, but was rebuilt by Fio Piccolo. 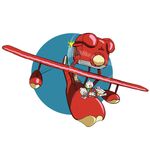