Porgs are curious, although extremely inquisitive, creatures with docile temperaments - when they discover new things, especially shiny objects, Porgs are immediately smitten with them. As aquatic birds, porgs love water for both swimming and drinking. They are easily panicked when threatened. Porgs can make different calls, but when pleased, they croon a special song. Although, they can also be completely silent when necessary, and are very stealthy when hunting for prey. Porgs enjoy being petted and scratched, especially behind their ears. Infant porgs are called porglets[1], and a group of porgs is called a "murder".[2]

Since they favor cold environments, they can be found roosting on cliffs of the First Jedi Temple, building nests and flying short distances. Thanks to their waterproof their feathers, porgs can make short dives into the ocean to catch fish, some of which are fed to porglets.

Porgs are pudgy aliens that are several inches tall and covered in feathers (with the exception of their legs). Male porgs are slightly larger than females.[3] The coloring of the porg varies, but the majority have brown feathers with a white underside and orange patches surrounding their eyes. This coloring also works as a natural camouflage. While porgs resemble normal birds, they have no beak, but rather a whiskered, otter-like snout containing sharp teeth and elongated canines. They have large brown eyes and nictating membranes.

Porgs appear on Ahch-To, hunting for fish in the seas around the First Jedi Temple. When Rey, Chewbacca, and R2-D2 travel to the island searching for Luke Skywalker, a couple of porgs investigate the Skywalker lightsaber after Luke throws it off a cliff behind him, although Rey retrieves it before they could turn the lightsaber on. During the evening, Chewbacca kills and roasts two porgs to eat. A few porgs stare at him before he could consume one, not wanting the Wookiee to eat their friends. Chewbacca scares them away, then notices one porg that stayed behind with a mournful look. Chewbacca scares it off as well, but decides to put down his meal to contemplate his actions.

Later, at least four porgs (and some porglets) start occupying the Millennium Falcon. Despite initially viewing them as nuisances, Chewbacca grows fond of the porgs and develops a friendship with them. However, this does not stop him from swatting them away when they inadvertently interfere with his piloting, such as when they start standing on the Falcon's control panel. When the Millennium Falcon arrives on Crait, one of the porgs accompanies Chewbacca during the battle on the salt planet.

A few porgs appear on Ahch-To where they watch Rey burn down Kylo Ren's TIE whisper when she decides to live in exile just like Luke did once, right before she meets his Force spirit.

The porgs appear in this short series. In the episode "Keep Away" a group of porgs run carrying BB-8's head while the droid purses them trying to recover it. In the episode "Stowaway", BB-8 and Chewbacca get annoyed with an agitated porg inside the Falcon.

Concept art showing a porg getting stabbed by a lightsaber.

Concept art of the porgs and Chewbacca inside the Millennium Falcon.

Porgs and Rey in Star Wars: Forces of Destiny.

Chewie and the porgs in Star Wars Roll Out. 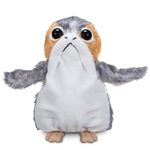 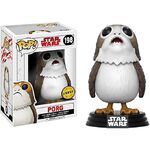 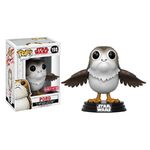 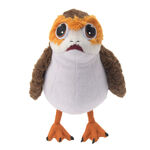 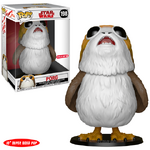 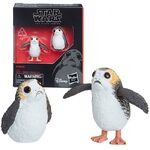 Retrieved from "https://disney.fandom.com/wiki/Porg?oldid=4322266"
Community content is available under CC-BY-SA unless otherwise noted.