The Pound
Toughy, Peg, Bull, Boris, Dachsie, and Pedro are supporting characters in Disney's 1955 animated feature film, Lady and the Tramp. They are a group of impounded dogs that Lady encounters after being wrongfully taken by the city's dogcatcher.

Toughy, Peg, Bull, Boris, Dachsie, and Pedro are a wide mix of dogs, all homeless and without families. Despite their differences, they share a common goal in wanting to escape and a common fear of being euthanized. Toughy, Bull, Pedro, and Boris have a dog chorus together, which they use to distract the dogcatchers—while they sing, Dachsie digs them a tunnel to freedom. By the time of Lady's arrival, the tunnel was only a chorus away from completion, which implies that the dogs were eventually able to escape. The dogs are also shown to be friends (or at the very least, acquaintances) of the Tramp. 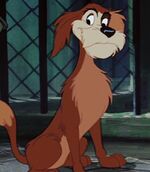 Toughy (voiced by Dallas McKennon) appears as the ringleader of the pound dogs. Along with his friends Bull, Boris, and Pedro, he leads a chorus of musical howls to pass time in the pound. Behind the scenes, he's leading an escape plot with the help of their friend, Dachsie, who works to dig a tunnel to escape while the others sing. He speaks with a stereotypical "tough guy" or "street smart" Brooklyn accent. He appears to be knowledgeable about the social life of local dogs, specifically in terms of the Tramp. He is generally laid-back and playful, though he shows fear in the possibility of being put down. When first meeting Lady, Toughy and Bull take part in a round of jokes in reference to the obviously lavished lifestyle that Lady leads. When Peg intervenes out of annoyance, she notes that Toughy and Bull mean no real harm.

In the 2019 remake, he was replaced by Dame and was voiced by Jentel Hawkins.

Peg (voiced by Peggy Lee), seemingly the only female dog in the pound, is a sultry pekingese. She is a former member of the Dog and Pony Follies where she worked as a performer, though she has since become a stray. As indicated by "He's a Tramp", Peg is very familiar with the Tramp, as she considers herself one of the "dames" that has it bad for him. Early in the film, when Tramp rescues her and Bull from the dogcatcher's wagon, she teasingly refers to him as 'Handsome.' Even so, she does not think highly of the concept of "true love". She briefly appears at the beginning when Tramp rescues her and Bull from the dogcatcher. Peg later appears in the movie after Lady is captured by the dogcatcher and taken to the pound. When Toughy and Bull start to pick on Lady, Peg steps in and defends her. She easily comforts Lady with her tough, yet sisterly attitude, and tries to make her feel welcomed during her stay. She also comforts Lady by telling her she will go free because she has a collar and license, unlike the other dogs there.

Bull (voiced by Bill Thompson) is an English bulldog who drools a lot and is particularly close friends with Toughy and Peg. Despite being trapped in the pound, Bull has an easygoing personality; he lives by the philosophy that "a short life is a merry one", which helps him to remain unfazed at the prospect of being put down. Bull briefly appears at the beginning in the back of the dogcatcher truck with Peg. Tramp helps them escape by unlocking the lock on the cage and distracting the dogcatcher. Towards the middle, it is shown that Bull has been recaptured. He meets Lady after she is impounded by the dogcatcher and comments on her collar. He and Toughy tease Lady for her uppercrust background, but quickly lay off per Peg's demands. During "He's a Tramp", Bull provides chorus for Peg along with the other dogs.

Boris (voiced by Alan Reed) is a tall, slender, gray Russian Wolfhound a.k.a. a Borzoi. He appears older and wiser than the other dogs, and like Peg, gives Lady comfort and advice in the pound. He is more romantic and sentimental about love than his friends, and believes Tramp will find true love one day. Peg describes him as a philosopher, and he does take a more thoughtful, reflective view to life in the pound than his friends. He likes to quote famous Russian authors such as Maxim Gorky to make his points, and is quite friendly and peaceful.

Boris actually existed in earlier versions of the film before Tramp was introduced, as one of Lady's neighbors. Boastful and recently moved into the neighborhood, he viewed for Lady's affection along with a mutt named Homer. Eventually, the neighbor roles were given to the characters of Jock and Trusty, and Boris was moved to elsewhere in the film.

In the 2019 remake, he was replaced by Chance and was voiced by James Bentley.

Dachsie (voiced by Bill Thompson) is a small, slender dachshund with a German accent. He is first seen trying to finish making a hole large enough for the dogs to escape through. After saying his only lines, "Just one more chorus, and we're out" and "Und Fifi...", the doors open and the dogcatcher comes for Lady to take her home. Dachsie quickly buries all the dirt and stands on top of the hole. His last appearance is when he starts digging again, and later he sings (howls) "He's a Tramp" with the other dogs. After Lady leaves the pound, Dachsie is not seen again in the rest of the film.

Pedro (voiced by Dallas McKennon) is a small, slender brown Chihuahua with a thick Mexican accent. Pedro is seen at the pound, in the middle of two bars. He sleeps in straw that looks like a nest. He is usually seen singing or howling with his friends. He also mentions that his sister, Rosita Chiquita Juanita Chihuahua, was one of the many lovers of the Tramp over the years.

After spending a day with the rascally Tramp, purebred Lady is caught by a dog catcher and transported to the local pound, where she meets a group of inmates whom, at first, poke fun at the oddity of a privileged dog ending up in the pound, though the motherly Peg intervenes and assures Lady that she will soon be released, on account of her collar.

Just then, the dogs watch as one of the inmates, Nutsy, takes the "long walk" and is put to sleep, motivating them to continue with their escape plan. They nevertheless seem to be open to the option of giving up, as they referred to it as a "short life and a merry one"; so they've come to learn from the Tramp. At the mention of Tramp, Lady is shocked, and this leads to the discovery that he has avoided the dogcatchers for ages, and seems to be an unstoppable force, aside from the fact that his love for females will likely be his downfall someday.

Before long, however, Lady's collar is checked and she is released to her owners. What became of the dogs she encountered in the pound is unknown.

Bull and Boris in "101 Dalmatian Street.