Originally created by Saban Entertainment, the franchise was under the ownership of the Walt Disney Company in the 2000s, and a total of seven Power Rangers seasons (named by the series itself as generations) were produced by BVS Entertainment and distributed internationally by Buena Vista International Television. The fans of the series named this phase of the saga as the "Disney Era". A videogame produced by Disney Interactive; named Power Rangers: Super Legends was made for celebrate the franchise's 15th anniversary in 2007. A "remastered" version of the first series was produced in 2010. Later that year, however, Disney sold the franchise and all the seasons of the series to Haim Saban, and between 2011 and 2017, the series was produced by Saban Brands (a Saban Capital Group company) and distributed worldwide by Marvista Entertainment. The sale also included shows related to Power Rangers, like VR Troopers and Masked Rider.

As of 2018, the franchise is now owned by toy company Hasbro.

The concept is based on the Super Sentai series of shows, however, is not an English dub of the original, but rather a new production with English-speaking actors spliced in with the original Japanese footage to varying ratios. Due to the very Japanese nature of many of Super Sentai's stories and cultural differences of moral standards, the American adaptations are generally changed to fit its Western audience.

The series that began the franchise, Mighty Morphin Power Rangers (an American adaptation of the 1992 Japanese Super Sentai series, Kyōryū Sentai Zyuranger), began broadcasting as part of the Fox Kids block of programming that aired on the Fox network. It lasted for three seasons (from 1993 to 1996).

Power Rangers was produced by Saban Entertainment and Renaissance-Atlantic Films from 1993 until the end of 2002 and was broadcast on the Fox Kids Network.

The Walt Disney Company purchased the franchise as part of the buyout of Fox Family Worldwide, which took place in 2001. This buyout also saw Saban Entertainment, the company who co-owned Fox Family Worldwide and the owners of the Power Rangers franchise becoming BVS Entertainment. The show continued to air on Fox until the company replaced its Fox Kids package with "FoxBox" in the United States. From September 2002, all Power Rangers shows aired on various Disney-owned networks (ABC Kids, Toon Disney and Jetix channels worldwide). ABC Family, aired Power Rangers until it did away with its Jetix time slot after August 31, 2006. On February 12, 2009, Toon Disney ended in the wake of Disney XD, ending cable airings of Power Rangers in certain areas of the United States. Several ABC affiliate broadcasting groups declined to air most of the Power Rangers series since 2006 due to the lack of FCC-compliant.

Disney eventually grew tired of the franchise (according to RPM producer Eddie Guzelian, Disney were embarrassed to even be airing the show let alone producing it due to the problems with the mentioned lack of FCC-compliant) and attempted to cancel it after Jungle Fury but were persuaded by Bandai (then the toy master licensee of the franchise) and Jetix Europe to make another season when they agreed to help fund it.

An article in The New Zealand Herald published on March 7, 2009 identified Power Rangers RPM as the last season of the Power Rangers run. Production manager Sally Campbell stated in an interview, "...at this stage we will not be shooting another season." A September 1, 2009, revision to Disney A to Z: The Official Encyclopedia by Disney's head archivist Dave Smith states that "production of new episodes [of Power Rangers] ceased in 2009". Production of Power Rangers ceased and the 2009 series by BVS Entertainment, RPM, ended on December 26, 2009.

On October 1, 2009, Bandai released a press release, stating that Disney would re-broadcast Mighty Morphin Power Rangers starting in January 2010 on ABC Kids instead of a new series utilizing footage from Samurai Sentai Shinkenger. A new toy line accompanied the series and appeared in stores in the later part of 2009. ABC's over-the air telecasts ended on August 28, 2010, and turned the hour back to affiliates.

After RPM, Disney successfully cancelled the show in 2009. On May 12, 2010, Haim Saban announced that through his company Saban Capital Group, had repurchased the Power Rangers franchise, including all the seasons of the series (including the ones that Disney produced). Haim Saban also repurchased 5 other ex-Saban shows from Disney which were related to Power Rangers (VR Troopers, Big Bad Beetleborgs, Masked Rider, Ninja Turtles: The Next Mutation and Mystic Knights of Tir Na Nog) on the same day. With this, he formed a new division of SCG, called Saban Brands and revived Power Rangers with a new series titled Power Rangers Samurai, and that old and newer seasons would now be aired on Nickelodeon starting in 2011. The franchise has continued on with brand new seasons every two years. Notoriously, the series has maintained the tradition of being recorded in New Zealand, an initiative taken by Disney since 2003 with Ninja Storm.

Jonathan Tzachor (producer of the Samurai season) stated that any season that was produced under Disney was to be declared non-canon. However, while this may be his personal view, Samurai (a Saban season) crossed over with RPM (a Disney season) in The Clash of the Red Rangers. Later on, some Disney Rangers made special appearances on the anniversary episodes of both Power Rangers Megaforce and Power Rangers Super Ninja Steel.

Seven years later, in 2018, just after being named the new toy master licensee for the franchise after Bandai lost the rights, Hasbro (which is also the toy master licensee of many Disney franchises, most notably the Marvel Comics characters and Star Wars) acquired the franchise from Saban Brands along other properties, with Power Rangers Beast Morphers (the first Hasbro-produced season) premiering on Nickelodeon on March 2, 2019. Saban Brands was eventually shut down after this buyout.

While Lionsgate is the owner and distributor of the 2017 film, with Hasbro planning to reboot the movie-franchise with Paramount Pictures in the near future, the first two theatrical features based on the series (Mighty Morphin Power Rangers: The Movie and Turbo: A Power Rangers Movie) were released by 20th Century Fox and have remained under their ownership to this day. When the Walt Disney Company merged with 21st Century Fox on March 20, 2019, both movies came with the sale and thus Disney once again owns pieces of Power Rangers history. Ironically, Shout! Factory, which has a licensing deal with Hasbro for most of its catalog (including Power Rangers), has released Blu-ray versions of both movies under its separate licensing deal with Fox.

Generations made by Disney

Some video games were released during the Disney Era, most of them licensed by THQ. These are:

Before the Disney Era, the Mighty Morphin Power Rangers made appearances in the Disney Hollywood Studios park during the first seasons of the television series, but then vanished. During the Disney Era, since 2002 to 2010, five Rangers (every from one season) were presented in the same park in different time slots (see image). They came in a special themed car in a different hour and later they leave the place until the next time slot. The shows ended in 2010 after Haim Saban purchased back the franchise. 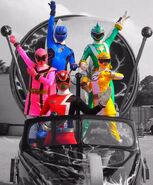 Disney originally had plans to create an animated version of the Power Rangers between 2007 and 2009. These plans were later cancelled for unknown reasons. Outside of a concept art (pictured right) and an unreleased animation demo, there's no information about this project. According to some sources, the series was planned to air on Disney XD.[1]

While unknown if it was pitched before or after Disney's own attempt, animation studio Nerd Corps Entertainment (now known as DHX Studios Vancouver) pitched a Power Rangers animated series to Disney in the mid-late 2000s. To help sell the idea, a crew of three hastily produced a promotional short over the course of a weekend ([1]). Disney turned down the offer.