“It's only Powerline, Dad. The biggest rock star on the planet.”
―Max Goof on Powerline[src]

Powerline is a famous Pop star. He is the idol of both Max Goof and the majority of the background characters from the 1995 film A Goofy Movie. He is known for the performance of such hit songs as "Stand Out" and "I2I".

On the morning of the last day of school before the summer break, Max wakes up late for school, surrounded by many Powerline photos and posters adorning the walls of his bedroom, just after having a dream-turned-nightmare regarding him and his crush Roxanne. As he struggles to get dressed, he is greeted by his father, Goofy, who, in his attempt to help clean up Max's messy room, accidentally ruins Max's life-size cardboard cutout of Powerline with his vacuum cleaner. When Goofy inquires as to who the cutout is meant to be, Max, unimpressed by his father's ignorance and lack of knowledge of the latest trends and music, retorts "It's only Powerline, Dad, the biggest rock star on the planet."

On his way to school, Max peeks into the window of a music store, through which he spies a large cutout of Powerline on display and being admired by a couple of girls.

Later, during an assembly at school, the student body president Stacey invites everyone to come to her party where Powerline's Los Angeles concert will be aired live on Pay-Per-View TV. Then, Max and his friends hijack the auditorium stage right in the middle of Principal Mazur's speech, creating a small concert in which Max performs "Stand Out" while dressed in costume as Powerline. The performance succeeds in making Max a school celebrity and impresses his love interest Roxanne, but also lands him in detention. In the principal's office, Roxanne complements Max on his dance, which Max describes as being "from Powerline's new video," prompting the two to express their shared interest in Powerline.

Roxanne then agrees to go with Max to Stacey's party, but unbeknownst to both of them, the principal had phoned Goofy about Max's prior actions, but Mazur was so furious about what happened, he overexaggerated the truth. Fearing his son may be heading down a life of crime, Goofy decides to take Max on a cross-country trip to bond with him. When Max tries to tell his father about the party, Goofy refuses to listen. Before leaving town, Max stops by Roxanne's house to call off their date, but when she mentions going to the party with someone else, Max frantically fabricates a story about his father knowing Powerline and tells her that he will be on stage with Powerline at the concert in Los Angeles.

During the trip with father, Max encounters his friend P.J., who is also on a trip with his own father. Inside a luxurious RV, P.J. plays and sings along with "Stand Out" as he scrubs the floor of the RV. P.J. then tells Max that everyone in town has heard about his going to the Powerline concert. And later that night, Max secretly changes the driving route on his father's road map to lead them to the concert in Los Angeles.

The next morning, Max is surprisingly made navigator for the trip by Goofy and is able to guide his father in the direction of Los Angeles. One night, when staying at a motel, Max and P.J. watch Powerline's "Stand Out" music video on TV, but then Goofy comes in. Having discovered his son's deception, Goofy is initially heartbroken, then angry, but after some reconciliation with his son the next day, he eventually decides to help Max make good on his word and get him on-stage with Powerline.

Goofy and Max finally arrive in Los Angeles on the night of the concert but are accidentally separated backstage. As they look for each other, Powerline appears on-stage and begins his performance of "I2I". While Max flees a security guard who caught him watching Powerline and his backup dancers from under the stage, Goofy falls into the electrical sphere Powerline entered the stage from and ends up on-stage right next to Powerline. As encouraged by Max, Goofy performs his Perfect Cast fishing technique as a freestyle dance, impressing everyone. Powerline then joins in the dance and integrates both it and Goofy into his performance. Max himself then crashes down onto the stage between the two, and all three of them break into dance together with everyone in the audience cheering for them, believing Goofy and Max to have been part of the performance all along.

Elsewhere, Roxanne, Stacey, P.J., Pete, Bobby, and others all watch the concert from different televisions and are amazed by the Goofs' performances. On their return home, Goofy brings Max to Roxanne's house where he confesses to her about how he had lied before about his dad knowing Powerline, for which Roxanne forgives him.

Prior to the release of A Goofy Movie, Powerline appeared in the 1994 Mouse Works 'funny face' book Goofy Gets Goofy (which, itself, is an adaptation of the Powerline concert scene from the movie). In this story, Powerline's role is largely the same as in the movie, with him performing at his rock concert and being surprised to see Goofy appear onstage with him after (in this version) the audience had tossed Goofy onto the stage. When Goofy starts dancing the Perfect Cast, Powerline joins in the dance right before Max swings down onto the stage from above, and all three dance together in front of everyone.

On February 12, 1997, Issue #2330 of the French magazine Le Journal de Mickey published a special Dingo & Max[2] comic strip titled "Je T'Ayuck" ("I Ayuck You").[3] Though Powerline himself does not appear in person, he is mentioned by P.J. when he asks what kind of gift Max plans to buy Roxanne for her birthday, with P.J.'s third guess being "A Powerline T-shirt?" ("Un tee-shirt de Powerline?").

Shortly after, when Max and P.J. pass by a store window, another cutout of Powerline is seen on display in the window, albeit with Powerline's shirt and boots colored light pink, his pants, collar, and wristband colored dark blue, his belt colored yellow, and both his fur and his nose colored peach.

Goofy ends up on stage right in front of Powerline.

Powerline doesn't mind at all about Goofy and Max suddenly interrupting his performance and welcomes them into the show instead.

A Powerline CD in Ducktales 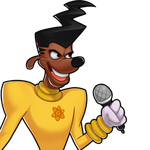 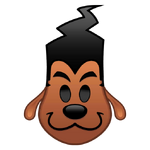