The Elite Praetorian Guard, also known as the Praetorian Guard, is an order of warriors that appears in Star Wars: The Last Jedi. The ones seen thus far consist of eight members of the First Order armed in crimson red armor. They are the royal bodyguards of Supreme Leader Snoke, being fiercely loyal to him.

Little is known of the Praetorians' personalities, other than that they have unwavering loyalty to Snoke, as they tried to avenge him after he was killed by Kylo Ren. Although each member is mute and ruthless in combat, they are also in a constant state of pain from the armor they wear. However, the guards' commitment and duty is so strong that they are willing to go through such sacrifices for Snoke's protection.

All Praetorian guards are garbed in the same armor, which is crimson red. They also wear robes and helmets made of plastoid. Each guard has nine plates of armor covering their arms, and their helmets are individualized and uniquely shaped so that they and their superiors can tell them apart. The Praetorians are comprised of four pairs, with both members of each pair sharing the same helmet and weapon.

The Praetorian guards appear when Kylo Ren is summoned by Supreme Leader Snoke to the throne room, where the First Order's Supreme Leader belittles his apprentice. When Kylo Ren rises to face Snoke, the guards raise their weapons, ready to strike in the event that Kylo should attempt to kill their master. However, Snoke orders them to stand down, and they willingly do so at his command.

The Praetorians are present when Rey is brought before Snoke by Kylo Ren, and witness Kylo's murder of the Supreme Leader. Seeking to avenge Snoke, all eight Praetorians engage Rey and Kylo Ren in a lightsaber duel, nearly overwhelming them. However, after a brief struggle, Rey and Kylo manage to kill all but one of them. The last one is defeated when Rey tosses the Skywalker lightsaber to Kylo, who is being held in a choke hold by the last guard. Kylo ignites the lightsaber directly through the Praetorian's face, killing him instantly and ending the fight.

Concept art of the Pratorian guards.

Concept art of Rey and Kylo Ren fighting together against the guards.

The fight against the guards in The Last Jedi Graphic Novel Adaptation. 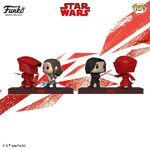 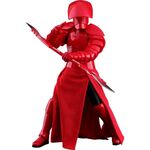 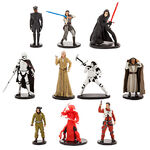 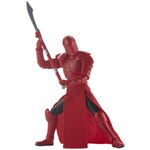 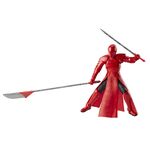 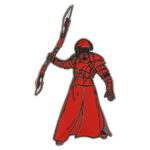 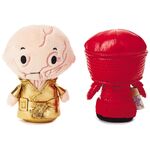