English
Prep & Landing (officially known as Disney Prep & Landing; also called Lanny and Wayne the Christmas Elves in Prep & Landing) is the name of a computer animated television special produced by Walt Disney Animation Studios that premiered on ABC on December 8, 2009 at 8:30 PM ET/PT, while in Canada, the special debuted on CTV December 10. The original date was to have been December 1, however, a speech at the United States Military Academy by United States President Barack Obama postponed the debut for a week. The special also aired on Freeform as part of their annual 25 Days of Christmas programming blocks from 2009 to 2018 (it was oddly absent from the line-up in 2019 and 2020, despite said event still including the sequel).

The setting is a high-tech command center at the North Pole, where an elf named Magee (voiced by Sarah Chalke), the North Pole Christmas Eve Command Center Coordinator (NPCECCC for short) pairs a disgruntled elf named Wayne (Dave Foley), who after working tirelessly on Prep & Landing for 227 years, doesn't receive an expected promotion to be the Director of Naughty List Intelligence, which went to his sidekick Peterson. Instead, Magee partners Wayne with Lanny (Derek Richardson), an idealistic rookie who has an undying enthusiasm for Christmas, to prepare the world for the annual trip of Santa Claus. However, they get more than they can bargain for when a young boy named Timmy Terwelp captures them in action, enabling Lanny to respark the spirit of Christmas in Wayne. Meanwhile, Miss Holly, Santa's assistant gives a briefing back at the North Pole on the trip, and Magee gets word of a storm over Section 7, where they are located and utters "Oh, frostbite" and calls out a code of "figgy pudding", passing by Timmy's house, but Wayne decides to override Magee's call to pass by and visit the house. However, prep is lost when their tracking and landing device is lost in said snowstorm so they improvise from a display using an inflatable Santa snow globe, and save Santa's sleigh from disaster. In the end, Santa gives Wayne a snowglobe with a miniature version of Timmy's house, and they see him enjoying Christmas... and turns down a promotion to being in charge of the Nice List Intelligence.

Prep & Landing was originally pitched by director Chris Williams as a short film for the newly re-opened theatrical shorts program at WDAS. Liking the idea, John Lasseter (Chief Creative Officer of Disney Animation) considered it to work best as a television special and with ABC executives were keen to repeat the success of the 2007 DreamWorks Animation special Shrek the Halls, approved the project.

Following Williams' directorial debut on the short film Glago's Guest, he was moved on to co-direct the feature film Bolt. The special continued production under the control of directors Kevin Deters and Stevie Wermers-Skelton (Goofy's How to Hook Up Your Home Theater).

A two-minute short on the Disney.com site, titled Tiny's Big Adventure, feature Magee's assistant trying to make a pot of coffee and in the process, accidentally ruins the elves' break room.

A seven-minute short that debuted in 2010, Operation: Secret Santa, features Betty White as the voice of Mrs. Claus, who along with Magee, sends Lanny and Wayne into Santa's office on a special assignment.

A sequel, "Prep & Landing: Naughty vs. Nice", premiered in 2011. In it, Wayne and Lanny uncover a hack by someone very naughty into the system, so they need the help of the head of the coal elves, not knowing that it is Noel, Wayne's long-lost and estranged brother.

For the 2011 holiday season, World of Color featured a Christmas preshow based on Prep and Landing starting on November 11. The pre-show became part of the new "Winter Dreams" themed show in 2013.

Prep and Landing became the first Disney property to officially cross over with Marvel's characters with the story "Mansion: Impossible", in which Wayne and Lanny must prepare the Avengers Mansion for Christmas. The story appeared in Avengers #19, Super-Heroes #20 and Spider-Man #20 in November 2011.

A printed adaptation is available from Disney Press, and plush toys, pins and ornaments are available at Disney Stores in season. A DVD of the special, which also contained Tiny's Big Adventure and Operation: Secret Santa, was released on November 22, 2011. The special and Prep & Landing: Naughty vs. Nice were later released together on the Prep & Landing Totally Tinsel Collection DVD and Blu-ray in 2012. 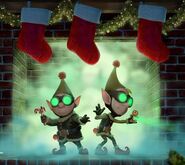 Cover to the DVD release